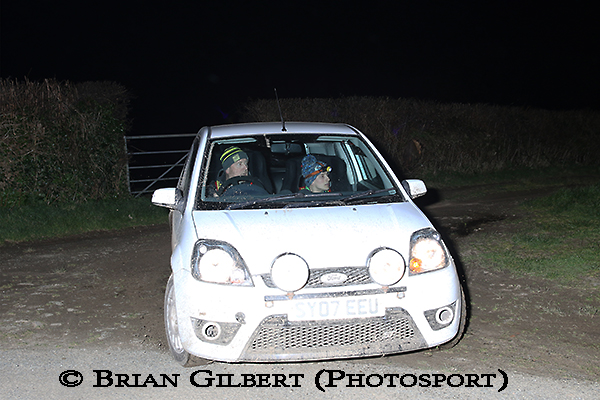 Clerk of the Course: Kevin Willis


South Hams Motor Club brought road rallying back to the Cornish lanes after a break of several years; their Primrose Road Rally being based near Launceston.

The 140 mile event was split between standard sections, with time controls timed to the minute, and regularities, which were to the second. There were three of the later, and this was where the meat of the action was concentrated.

After a short run out, competitive motoring started in the lanes south of Launceston. There were problems for the organisers almost straight away as the clock at TC3 started to misbehaving, leading not only to the cancellation of time penalties at the control, but at the following TC4 as well.

A bigger issue was caused when the Sierra of Pete Stimson/Mark Butler became stuck in a ford just after PC6 on Tremollet Down. This blocked the road for most of the field, who were then forced to reverse back up the narrow lane. This meant that penalties were also scrubbed at the first timing point on the opening regularity.

However, three timing points remained on the section and all crews dropped time on the regularity, which was centre around the hamlet of Stoke Climsland. Top seeds, Iwan Davies/Andrew Lowe (Ford Escort) were fastest through here, dropping just six seconds.

Andrew Hankey/Nathan Coles (BMW 318Ti) held third after the regularity, being just one second behind Luke Quinnell/Kayleigh Dingle (MG ZR), but the BMW crew then booked in early at the following Time Control and added two minutes to their total.

The route took crews north of Callington, but most emerged at the end of the section without losing any more time. The first non-competitive section of the night, after TC22, allowed any lost time to be regained.

Ethan Davies had borrowed his father’s Festival Targa winning Puma, after damaging his car on the previous week’s Bath MC event. He and Nick Bloxham were in seventh place at the Time Recovery Section, but retired soon afterwards after water damaged their engine.

A standard section with six TCs headed south from Callington to the petrol halt at Trerulefoot. Quinnell/Dingle struggled here and dropped a minute at each of three separate controls; they fell from second to fifth.

The other three leading crews cleaned all the TCs, so at the fuel halt the positions were: Davies/Lowe 00:06; Considine/Layland 00:20; How/Jones 00:21. This group was well clear of the field as Dave Webb/Jacob Williams were on 2m34s in fourth place.

Philip Luxton/Oliver Luxton (Rover 25) were in tenth place, but were struggling with overheating problems. They disappeared from fray shortly afterwards. Brendan Wellman/Daniel Pidgeon were one place higher at Petrol; they had been suffering from clutch issues on their Nissan Micra, but it seemed to have cleared at the halt.

A short standard section opened the second half, but caused no problems for the top half of the field. There the followed an hour competitive run, which included a regularity with three timing points in the middle.

It was only at these timing points that the leaders dropped time. This section was to the south of Liskeard. It was the final timing point near Bury Down at which all the top teams picked up penalties. How/Jones dropped just eight seconds, while Davies/Lowe were 27 seconds late at the control. This put How/Jones into the lead, but their advantage over Davies/Lowe was just four seconds.

Considine/Layland were over a minute late at ITC34 and were now 1m02s off the lead in third place. Webb/Williams were still in fourth, while Hankey/Coles had recovered to be in fifth place.

A short make up time section brought competitors to the start of the final section; this started with the longest regularity of the night, which contained five timing points. It was the second of these, ITC50, that was to have the biggest impact on the result.

Before this point was reached, How/Jones threw away their lead as they put their MG off the road and up a bank. They were pulled back on to the tarmac by Wellman/Pidgeon, but had dropped more than ten minutes.

This act of charity may not have paid off for Wellman/Pidgeon; two junctions after the towing assistance, their Nissan’s clutch failed and they were out.

This excitement put Davies/Lowe into a clear lead; they had been quickest to the first timing point and now led Considine/Layland by almost 90 seconds. However, they’re joy was to be short lived.

The next timing point (ITC50), near Drawbridge, was on a large triangle, with the route going the long way around. Davies/Lowe were adjudged to have got the approach wrong; the resultant 15 minute penalty saw them fall down the order. They were not alone, nine other crews were similarly penalised, these included How/Jones and Hankey/Coles.

These late dramas meant that Considine/Layland came home to claim the win, with a victory margin of almost two and a half minutes over Webb/Williams. Paul Watts/Andy Ballantyne (MG ZR) survived a close encounter with a flood, to finish in third place.