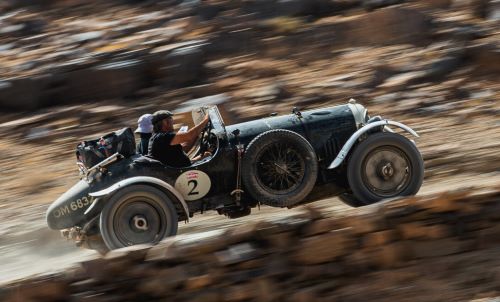 
Five days after the end of the Temple Rally, HERO-ERA embarked on another long distance rally, the Sahara Challenge. The 4,500km event, started and finished at Malaga in Spain, but ten of the twelve day's competition were on the roads and tracks of Morocco.

Forty-one cars turned up for Scrutineering, however only 40 took the start the following day; the Mercury Comet of Ludovic Bois/Julia Colman broke its engine. Despite the best efforts of the HERO mechanics, it could not be repaired in time to take part in the challenge.

The competition for Day One consisted of three regularities in Andalusia; they were designed as a warm up for the crews. It proved too much for the Porsche 911 of John Gearing/James Gearing; it suffered ignition problems and had to return to Malaga.

Penalties were minimal for the leading runners, with Nigel Woof/Sally Woof (Volvo PV544) heading the leader board at the end of the day, with a total of just two seconds. This was one second ahead of Bill Cleyndert/Georgina Cleyndert (Bentley 3-4½).

An evening ferry crossing took the rally to Morocco and a two hour drive to the overnight hotel at M’Diq.

The route headed almost due south, through the Rif Mountains, on Day Two. There were four regularities to be tackled and, as with most sections in the event, had just one timing point. The day ended at the city of Fes. Lars Rolner/Annette Rolner (Porsche 911S) put in the best performance of the day, dropping only two seconds, giving them a total of six; they now led the rest of the field by twelve.

On this event only competitors in the Vintage and Vintageant classes, that is pre-1947 cars, were eligible for overall awards. This meant that at the end of Day Two Brian Scowcroft/Andrew Scowcroft (Chevrolet Fangio Coupe) were the overall leaders, 12 seconds behind Rolner/Rolner.

Day 3 started with a loop through the Middle Atlas Mountains, to the east of Fes, before the route moved south to the overnight halt at Midelt. There were three regularities, plus the first Sporting Time Control section. The latter, timed to the minute, caused little difficulty for the leading runners, 24 crews were clean through them.

The big news of the day was the mechanical issues that afflicted the overnight leaders, Rolner/Rolner. Their Porsche suffered fuel pump problems and they had to cut the latter part of the day’s route, falling 28 places in the process. Also in trouble were Lars-Olof Staffans/Heikki Saloheimo, whose Morgan 4/4 Series V had developed exhaust problems, while brake problems caused Neil Lawson-May/Paul Rivlin (Buick 40C) to miss out the final regularity.

As a result, Nigel Woof/Sally Woof moved back to the head of the leader board, five seconds ahead of the Datsun 240Z of Franc Hofermann-Kiefer/Fritz Hofermann-Kiefer. The best performance of the day was put in by Carlos Reider/Urs Schnueriger (Ford Model A Coupe); they dropped just three seconds and moved into the overall lead.

It had been a problematic day for Scowcroft/Scowcroft; their Fangio Coupe had broken a drive shaft. Although they dropped some time, they were still third overall. Unfortunately, illness caused their retirement the following day.

The Volvo 122S of Colin Paton/Fiona Paton ground to halt towards the end of the day with an oil pressure problem. They were towed into Midelt, but were unable to restart on Day Four.

The day took crews over the High Atlas Mountains to the edge of the Sahara at Erfoud. There was one regularity and two Sporting Time Control sections. The latter were timed to the minute and had a 30 second penalty for each minute late. With total penalties being a matter of seconds at the top the leader board, making your minute was crucial.

Reider/Schneuriger dropped a minute at three successive controls on the first STC section, which ran over the top of the Atlas range. This saw them fall to third place overall. On the second STC section, through desert tracks, the overnight leaders, Woof/Woof, were two minutes late; they dropped to fifth position in the final standings of the day.

Hofermann-Kiefer/Hofermann-Kiefer got to all the STCs on schedule and, as they collectied only five seconds at the single regularity timing point of the day, moved into the lead for the first time. At the day end they were 11 seconds ahead of Pierre Gerber/Alice Leuenberger (Ford Coupe), who were now the leading Vintage crew. Their fuel pump problems behind them, Lars Rolner/Annette Rolner put in the best performance of the day, dropping just a single second.

Day Five was a half day, featuring two Sporting TC sections in the deserts. The overnight halt was a camp below spectacular sand dunes. Accurately following the GPS way point navigation was critical.

Eleven crews completed the day having not added to their totals, they'd arrived at every control on their minute. This included the top three crews on the position table, so Hofermann-Kiefer/Hofermann-Kiefer headed the list, while, just behind them, Gerber/Leuenberger, were the top Vintage team and therefore held the overall lead.

The main losers of the day were Alex Vassbotten/Sebastian Gross (Alvis Firefly12/70); they had been in fourth place at the end of Day 4, but encountered problems with their GPS on the opening section. They fell from second in the overall standings to ninth.

The sand caused the demise of the Morgan 4 Plus of Bjorn Schage/Trond Brathen; the diff failed on their machine, and, having held second place in the Classic category over night, they were out of the event.

The route for Day 6 headed almost due west, finishing in Ouazazate; there were 400 kms, the final STC section of the event and two regularities to cover. The second regularity was the most demanding so far, with two timing points and a tricky speed change/critical navigation point halfway through. Many competitors picked up the two minute maximum penalty at the final timing point.

The best performance of the day was made by Woof/Woof; they dropped 24 seconds and this pushed them back to the top of the leader board; 42 seconds ahead of Hofermann-Kiefer/ Hofermann-Kiefer, who picked up a two minute penalty at TP 6.2b.

Gerber/Leuenberger still led the Vintage category, but Bill Cleyndert/Georgia Cleyndert had closed to within three seconds of them.

A surprisingly rainy Day 7 saw the route close in on the Atlantic coast, with the overnight halt at Tafraoute. There were three regularities to tackle and Cleyndert/Cleyndert dropped just a single second all day, moving them to within one second of the overall lead. The leader board was very stable, with no changes at all in the top 18 positions.

The hardest day of the rally was the eighth; it contained four regularities, the last having three timing points. A murky morning gave way to a sunny afternoon as crews ended the day on the Atlantic at Essaouira.

The best performance of the day was put in by the father and son team of Kevin Bradburn/Cole Bradburn (Porsche 912); they added just 16 seconds to their total. They were, however, still in ninth place, over two minutes behind eighth, but now three minutes ahead of tenth.

Nigel Woof/Sally Woof extended their advantage at the top of the table by six seconds; they having put in the day's second best performance on 18 seconds. Bill Cleyndert/Georgia Cleyndert dropped 19 and this gave them the overall lead as they passed their Vintage category rivals Pierre Gerber/Alice Leuenberger.

The Mercedes Benz 230 Fintail of Martin Dippie/Frances Dippie had to be towed to the overnight halt, but they were still in the top ten. Less fortunate were the popular Japanese crew of Tsuguo Shintani/Sumiko Kokonno, whose Buick Doctors Coupe broke a wheel and they were out.

Day 9 was the day of the Marrakesh Express, as three regularities took the route back inland to the mecca of the Sixties hippy generation.

Woof/Woof lost 20 seconds with a timing miscalculation at the first of two timing points on the third regularity. They remained at the top of the leader table, but their lead was cut to 22 seconds, as Hofermann-Kiefer/ Hofermann-Kiefer dropped a mere 8 seconds during the day. Cleyndert/Cleyndert had another good day, increasing their total by just 9 seconds, although Gerber/ Leuenberger, who were on ten seconds for the day, were still challenging for the overall win.

Once again, the best performance of the day was put in by Bradburn/Bradburn; they dropped 5 seconds, but they remained in their isolated ninth place.

The only change in the top ten positions saw New Zealanders Martin Dippie/Frances Dippie move to seventh in the table in their Arrive & Drive Mercedes Benz 230 Fintail. This was the navigator's first experience of competitive motorsport and the pair were using the Sahara Challenge as a preparation event for an assault on the Peking to Paris. Also using the African adventure as a warm up for the P2P were the Argentinian pairing of Jorge Perez Companc/Jose Volta. They were using a Chevrolet Coupe built by 2003 WRC Champion Co-Driver Phil Mills' Viking Motorsport operation. The Chevrolet was now holding a clear third place overall, a position they'd hold until the Finish.

The opening regularity of Day 10 had to be cancelled due to the road having been washed away in the recent rain storms.

Reg 2, now the opening one of the day, proved to be decisive for the positions at the top of the table; Woof/Woof missed a tricky slot and were 47 seconds late at the next timing point. Hofermann-Kiefer/Hofermann-Kiefer picked up three seconds and moved into a lead that they weren't to lose.

The day's route took crews from Marrakech to Morocco’s capital, Rabat. For the third day in succession Bradburn/Bradburn dropped the least time of any crew and finally managed to overhaul Ben Morgan/Ivor Dunbar (Studebaker Champion Coupe) for eighth place.

Having had to miss out two days of competition due to a failed TCA, Peter Moore/Dan Stellmacher got their Austin Healey Sprite repaired and put in the second best performance of the day. Their tenacity was rewarded at the finish with receipt of the “Against All Odds” Award.

The final day in Morocco was a half day of competition as the rally headed for the ferry back to Spain. The intended three regularities were cut to two, after roadworks appeared on the third section and it had to be abandoned. There were no changes in the top 24 places, but Woof/Woof added to just one second to their total and closed the gap to Hofermann-Kiefer/Hofermann-Kiefer to 12 seconds, ensuring the last day of the event, back in Spain, could possibly see further changes to the lead.

The gap between the two crews at the top of the table did tighten over the last three regularity of the 4,500 kilometre event; however, at the Finish Franc Hofermann-Kiefer/Fritz Hofermann-Kiefe held on to win the Classic Category by five seconds.

The Overall win, only open to Vintage cars, went to the father and daughter pairing of Bill Cleyndert/Georgina Cleyndert, on the navigator first event; they were third on the timing table, only 26 seconds from the top.