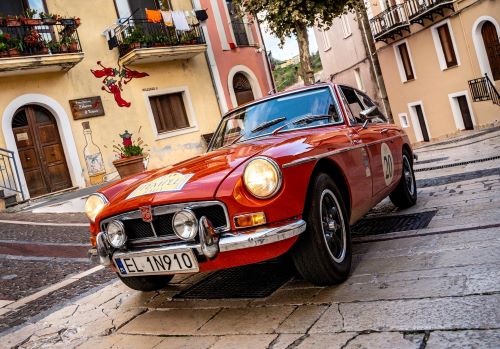 
The Temple Rally was the third in HERO-ERA's European Trilogy; the first two being the Baltic Classic in 2017 and the 2019 Adriatic Adventure.

The Temple started in Athens. There then followed five days in Greece, before a crossing to Calabria and then on to Sicily. The 13 day event finished with a run up to Rome.

A disappointing starters list of just 21 crews took the flag from the Panathenaic Stadium, the site of the first modern Olympic Games in 1896.

Car 2, the Bentley Speed 8 of Yves Faymonville/Kerstin Schmitt were in difficulties after the finish of the first regularity; their car suffering a diff failure. Hans Lycketorp/Karl Bergquist (Porsche 911) had to cut out the competitive sections on Day One as the car went sick.

Also in the trouble were Steve Young/Deborah Woollard (Datsun 240Z); the temperature in their car was above 40⁰C and the navigator was suffering from heat exhaustion. Medical assistance was quickly in hand, but the crew decided to miss the rest of the day's competition.

Peter Morton/Louise Morton (BMW 2002) had been fastest by six seconds on the first test at the Megara Track, this gave them a lead at the lunch halt. Three seconds behind them, Benno Britschgi/Nina Britschgi (Ford Mustang 390GT) and Andrew Laing/Ian Milne (Datsun 240Z) were tied for second place.

The best performance on the regularity through Sparta was put up by John Whitelock/Nicole Whitelock (Mercedes Benz 280SL); they were now in seventh place.

Competitors crossed the Isthmus of Corinth and tackled two regularities during the afternoon on the Peloponnese Peninsula. Britschgi/Britschgi put in the best performance on both these sections and moved into the lead at the end of the day. Tomasz Dzitko/Beata Siwek (MGB GT) added only a second more than the leaders to their total and moved up to second place overall.

Day Two was spent in Laconia, with the lunch halt being taken at the southern end of the Mani Peninsula. There were four regularities and a test to be tackled. By the time that competitors reached the overnight halt at Kalamata there had been a lead change with Dzitko/Siwek ending the day 10 seconds ahead of Britschgi/Britschgi, with Morton/Morton in third, 39 seconds off the lead. The rest of the field was over two minutes behind these three.

The route for the third day took crews north and then west to finish at Ancient Olympia. A test just outside Kalamata opened competition; then competitors tackled four regularities.

Problems with their tripmeter caused Dzitko/Siwek to lose time; this allowed Britschgi/Britschgi back into the lead. The Mustang pairing were fastest on the test and put in the best performance of the day. They were 37 seconds ahead by the time crews booked into the final MTC at Olympia.

The broken diff had been replaced on the No.2 Bentley and Yves Faymonville/Kerstin Schmitt returned to the fray.

Day Four linked the two historical sites of Olympia and Delphi, with the route leaving the Peloponnese via the Patras Bridge.

A number of cars suffered from mechanical maladies during the day. Third-placed Peter Morton/Louise Morton were delayed at the start of the first regularity, but their issues were sorted by the mechanics and they continued.

Meanwhile Car 1, the Aston Martin of Nigel Dowding/Mary Antcliff, had a gearbox problem, which meant that they had to complete one regularity stuck in second gear. The problem was traced to a loose nut, which was repaired with the help of a local garage.

More seriously affected by gearbox issues were Hans Lycketorp/Karl Bergquist; their Porsche 911 became stuck in reverse gear and had to be transported from the opening section to the Finish hotel, where the problem was solved.

Once again, Britschgi/Britschgi put in the best performance of the day; dropping just 18 seconds and extending their lead to over a minute. Despite their mechanical scare, Morton/Morton were now 14 seconds behind Dzitko/Siwek in the battle for second place. Glorious sunshine had bathed the event since the start, but Day 5 started in gloomy rain. The opening regularity, which ran through the Mount Ti National Park, had its average speeds dropped and was shortened as a result of the weather.

Conditions improved quickly and the roads were dry for two tests on a closed road at Plastiras Lake. The course was tackled up hill before the lunch halt and then downhill afterwards. Dzitko/Siwek were fastest on both tests and this helped them close the gap to the leaders by 21 seconds.

The Mustang of John Yates/Joan Gee was one of two cars to suffer an off road excursion; they skidded off on the final corner, but quickly regained the asphalt. Dowding/Antcliff in the Aston Martin went further off and had to reverse back on to the road.

An overnight ferry crossing took the rally to Italy, this was followed by Day 6, which had no competitive element.

Britschgi/Britschgi lost their lead on Day 7, which ran down the toe of Italy. They missed a speed change point and picked up 1m 56s in early penalties. Dzitko/Siwek now led by 1m 09s, having been fastest on the first test of the day.

Morton/Morton were now in a lonely third place; one minute behind Britschgi/Britschgi, but three minutes ahead of fourth.

After a ferry crossing to Sicily, crews regrouped by the Targa Florio Museum at lunchtime; this was at Collesano on the north coast of the island. Two regularities took competitors across the island to finish on the south coast at Agrigento. There were no dramas and the positions remained relatively unchanged.

In contrast Day 9 was a full day of competition, with a test and four regularities. It finished on the side of Mount Etna. Dzitko/Siwek were second fastest, behind Martin Beck/Joe Beck (Porsche 911), on the test, but still saw their lead cut to 56 seconds as Britschgi/Britschgi, who had only dropped a total of nine seconds on the four regularities.

Peter Morton/Louise Morton were still in third place, although they had a difficult day. A gearbox oil leak was repaired by the mechanics at the lunch halt, then, in the afternoon, the car suffered a misfire, the main suspect for the problem being dodgy fuel.

The climb up to Etna caused many cars to overheat, these included the leaders in their MG B GT, and the similar car of Steve Gale/Penny Gale. The Gales also suffered a brake failure, but made it to the Finish. The Volvo Amazon of Andy Twort/Claudine Bloom almost failed to get off the line at one timing point, with a slipping clutch and an overheating car.

In more serious problems were Christian Collenberg/Beatrice Collenberg; they broke the suspension on their BMW 1800 after colliding with a wall. They had to be recovered to the Finish hotel and missed the final MTC. The final day in Sicily, Day 10, was a rest day for sight seeing and, where required, repairs to the cars.

After an early morning ferry back to the Italian mainland, crews regrouped for the start of the rally’s toughest day near Pizzo. The leaders, Dzitko/Siwek, had a superb day, dropping just 21 seconds over the day’s nine timing points. In contrast, Britschgi/Britschgi had a difficult run, mixing up their timing, they lost 1m 28s. They now lay 2m 03s off the lead.

The penultimate day had a lunch time finish, allowing competitors time for after noon excursions to Pompei, Vesuvius or the Amalfi Coast. There were two regularities that made no changes to the top ten, although Britschgi/Britschgi closed the gap to the leaders by six seconds.

Steve Lambert/Ruth Lambert (VW Karmann Ghia Coupe), who had been in sixth place, stopped on the first section with clutch problems. This caused them to cut out the remainder of the day's competition. They fell to fifteenth place at the Finish.

Once again, Britschgi/Britschgi narrowed the gap to the leaders over the two regularities and two tests that finished off the competition, but the gain was only eight seconds, so the Polish couple, Tomasz Dzitko/Beata Siwek, took a comfortable win in the MGB GT. Their success being, in no small part, due to putting up the best performance of any crew on the rally's 36 regularities.

The honour of being the fastest driver over the ten tests was closely contested. Peter Morton/Louise Morton won the prestige of being that crew; they finished with a total just one second less than Dzitko/Siwek, while Britschgi/Britschgi were only six seconds further back.