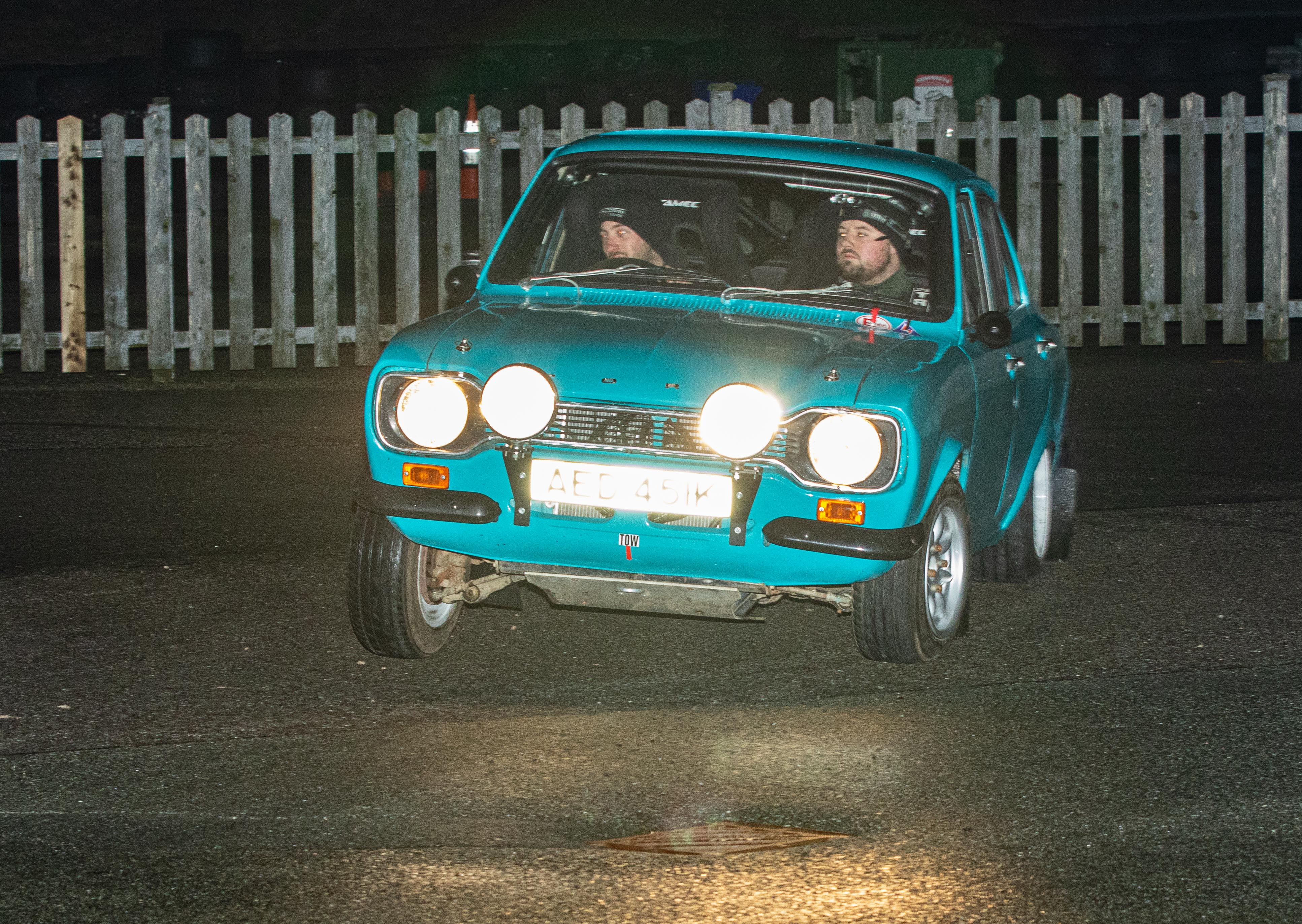 Clerk of the Course: Deio Hughes & Will Hughes

The rally was based at the Anglesey Race Circuit and opened with a one mile test at that venue. Fastest, by three seconds, on the test were top seeds Iwan Jones/Iwan Roberts in their Ford Ka, who were looking to repeat their Rali Goffa James Trenholme victory. Tied on second quickest were Tom Williams/Gareth Flynn (Ford Escort) and Iwan Bowness/Tomos Shakespeare (Peugeot 206 GTi).

Six crews received a test maximum after they failed to halt at the test finish stop line. Meanwhile Gwynant Jones/Dylan Ireland (Toyota Corolla) were delayed as they picked up a puncture; the circuit rules meant that they had to stop and change it in the test. Most unfortunate were Tim Millington/Andrew Millington who suffered a broken drive shaft on their Mini Cooper; the Warrington pair became the event’s first retirement.

Competitors were then given two hours to plot the 75 mile route, before they tackled the first road section, which was a short straightforward four and half mile warm up, starting at Aberffraw. Almost all crews completed it without incurring a penalty.

The second twisty 10 mile section started just north of Llanfaelog, it included two intermediate timing points, and finished near Llyn Traffwll. Jones/Roberts consolidated their lead by taking fastest time, but Williams/Flynn maintained the pressure on the leaders by being just eight seconds behind them.

Ifan Devine/Dewi Phillips (Citroen Saxo) mis-plotted the final part of the section, adding two minutes to their time and, more importantly, missing a PC, giving them a fail. Without this error they may have been in the battle for top ten finish at the end of the night.

Clutch failure stopped the Peugeot 206 GTi of Jamie Ollernshaw/Rhys Williams on this section. While a broken alternator belt left Ian Owen/Rhys Owen (MG ZR) in the dark and out of the event.

A short but tricky two and a half mile section took crews to a halt and regroup at Valley. Once again Jones/Roberts were fastest and, once again, Williams/Flynn were second fastest, five seconds down on the leaders.

This meant that, at the halt, Jones/Roberts led Williams/Flynn by 16 seconds. Dafydd Jones/Carwyn Evans (Nissan Micra) were in a lonely third place, 53 seconds behind the leaders, but 44 seconds in front of fourth placed Gareth Edwards/Dylan Jones (Ford Escort). Edwards/Jones were only one second ahead of Alun Barnes/Catrin Enlli, who were in fifth.

At this point, Meilir Llwyd Huws/Guto Williams had a massive lead in the Beginners Class; they were over two and a half minutes ahead of their nearest category rivals. They weren’t destined to maintain this position to the Finish; they were one of eleven crews to collect a wrong approach at one of the final PCs of the night.

The ten mile fourth section had two Intermediate Time Controls; it started at Bodedern, looped as far as Llynon Hall, before finishing near Trefor. The battle for the lead remained close as Jones/Roberts were one second faster than Williams/Flynn.

The fifth and sixth sections, which took competitors through the lanes north of Llangefni, didn’t cause issues for any of the top runners. The event was to be decided over the final ten mile section; it contained three time points, plus the finish clock.

It started at Nant-yr-Odyn and twisty its way to Bodorgan Station. The penultimate passage control, PC7J, was to cause a problem for many crews. It was a three metre control and led 11 navigators to gain wrong approaches.

More significantly for the lead battle was that the Ford Ka of Jones/Roberts developed a severe misfire; they dropped 3m 10s, while Williams/Flynn added just 27 seconds to their total. This meant that the latter crew came through to take victory, while the erstwhile leaders fell to fifth place.

Williams/Flynn thus ended the rally with a winning margin of almost two minutes. They also won the award for the Best Presented Car.

Ceri Hicks/Dewi Jones (Mazda MX5) had been in tenth place at the halfway halt, but put in the best performance of any crew over the second half of the rally and came through to take the runner up spot, finishing 24 seconds ahead of Alun Barnes/Catrin Enlli (Subaru Impreza).

The last car away, Chloe Louise Thomas/Catrin Jones (Citroen C2), were the only Beginners crew to complete the route without incurring a fail and so took the class win and the Valentine Trophy.