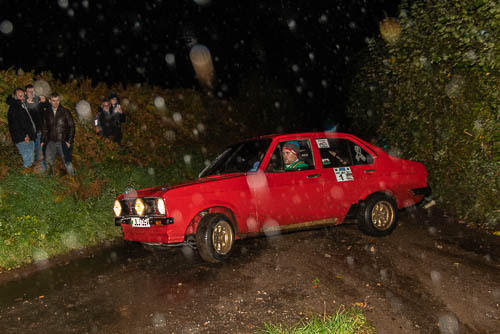 Clerk of the Course: Paul Tod


Fighting their way through the remnants of Storm Callum, Kevin Davies/Michael Gilbey took another decisive win on the 1000 Lanes Road Rally on Saturday night. Never headed, the pair romped home with a victory margin of over a minute. The result virtual secures the Welsh Championship for Gilbey.

The battle for second place was much closer with Andy Davies/Dale Bowen beating George Williams/Daniel Stone by one second. Davies/Bowen had been unfortunate to pick up a puncture on the second section, they lost two minutes, but were then fortunate in that the section had to be scrubbed due to an unrelated route blockage. This result may be significant at the end of the season as the two drivers battle for the Welsh Drivers’ crown.

Defending champions, Mark ‘GT’ Roberts/Dylan Jenkins, saw their chances of retaining their title fade as they suffered a puncture on the final section and trailed in in eighth place.