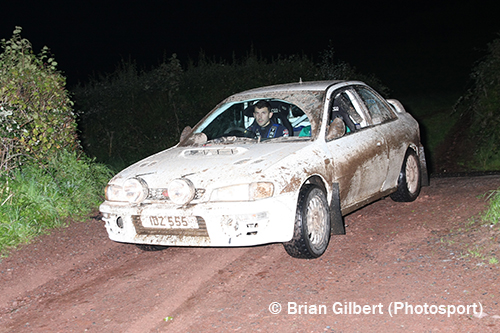 
After missing the Rali Mon, Andy Davies/Michael Gilbey put themselves back into pole position to win the Welsh Championship by taking first place on The Autumn Rally on Saturday night.

Petrol wasn’t taken until almost two-thirds distance, however the leading order changed significantly after the halt. The winners only moved to the front on the very last section. Meanwhile the leaders at the break, Martin Curzon/Rob Thomas, dropped to eighth place at the Finish after losing four minutes at one time control.

Their misfortune put Kevin ‘Penclawdd’ Jones/Dafydd Evans in the lead, but they fell behind Davies/Gilbey with two TCs to go. They then just beat off a challenge from Huw Jones/Daniel Jones for the runner up spot.

Top seeds, Mike Roberts/Dafydd Sion Lloyd, should have finished in second place but for an error when they failed to carry seconds dropped at the previous TC on to the next; the mistake cost them 33 seconds.