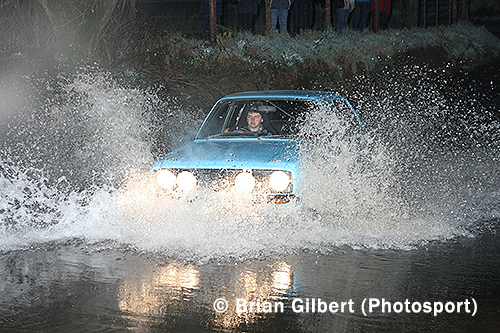 
Robert Stephens/Nathan Summer moved from second place at the petrol halt to take a clear victory on the Rali Bro Preseli on Saturday night. The annual novice-oriented event, from which Expert crews are excluded from entering, attracted a near capacity of 72 for a very wet and slippery route through the Preseli Mountains.

Regular autograss competitor Daniel Owen James, navigated by Hefin Jones, started at Car 58 and was the surprise leaders at the halfway point. They were the only crew to have cleaned the section through the Glogue Quarry, which was timed to the minute. Combined with quick times on all other sections in the first half, they held a 26 second lead at Petrol. However they couldn’t quite maintain that pace in the second half and fell to fourth overall at the Finish, although they were still seven minutes ahead of any other Novice Class crew.

The winners dropped just over a minute after the restart and came home as well-deserved winners. Heulyn Phillips/Wyn Mathias moved from sixth at Petrol to take the runner up spot, just holding off a late challenge from Eifion Thomas/Dewi Davies for the position.

Nigel Nelson continued his run of bad luck, when he and navigator Rhys Lewis retired their Impreza with engine problems in the early part of the event.