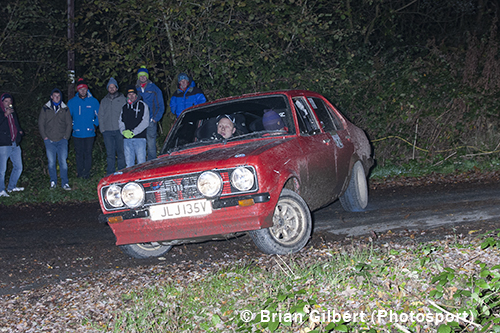 
Kevin Davies/Dale Bowen won a closely fought Rali Cilwendeg to secure their third win on the West Wales classic. The pair set a blistering pace in the opening sections and had built up a lead of 25 seconds over Daniel Jones/Gerwyn Barry by the petrol halt. The latter crew retired in the second half with reported engine maladies.

The chase of the leaders was then taken up by Andy Davies/Michael Gilbey, who admitted to being slightly off the pace early on; the fastest crew after the restart, they closed their halfway deficit but were still half a minute behind at the Finish.

Michael Gilbey had already secured the Welsh Championship crown, but the result gave Andy Davies a firm hand on the Drivers’ title. His task was made easier as Mark ‘GT’ Roberts failed to make the start and George Williams was delayed for six minutes when a rotor arm broke; without that delay Williams would have challenged for a top placing.

Top seeds Dyfrig James/Emyr Jones, in fifth place at Petrol, went out soon after the restart with carburettor problems. Meanwhile John Davies had hoped to follow up his third place on Saturday’s Exmoor Targa with a win on the Cilwendeg, however, having dashed back from Somerset, he found his Astra’s engine not to be running smoothly and scrubbed his entry.