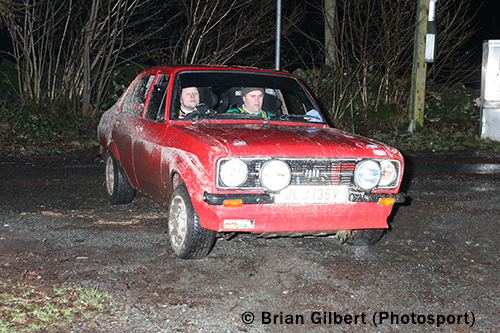 Clerk of the Course: Linda Thomas


Kevin Davies/Michael Gilbey took a second successive victory on the Rali Mike Darowen Bro Ddyfi, matching exactly their winning margin of last year. Once again a Welsh Championship round was dominated by Davies’s red Escort; the pair led from the off and no one else came close to matching their pace.

In contrast there was a tight battle for second place; the surprise of the event, Einion Williams/Darren Ikin, led reigning Welsh Champions Mark ‘GT’ Roberts/Dylan Jenkins by just three seconds at Petrol, but managed to extend this to 46 seconds by the Finish. Kevin ‘Penclaw’ Jones/Alan James continued their good run of results to secure fourth and look likely to take their first overall win at some point during the year.

It was a less happy night for George Williams/Daniel Stone, who broke a shaft early on in the event. Dafydd Evans/Carl Jones retired with a broken gear linkage, while the Escort of Steven John Williams/Dafydd Sion Lloyd succumbed to fuel feed problems.