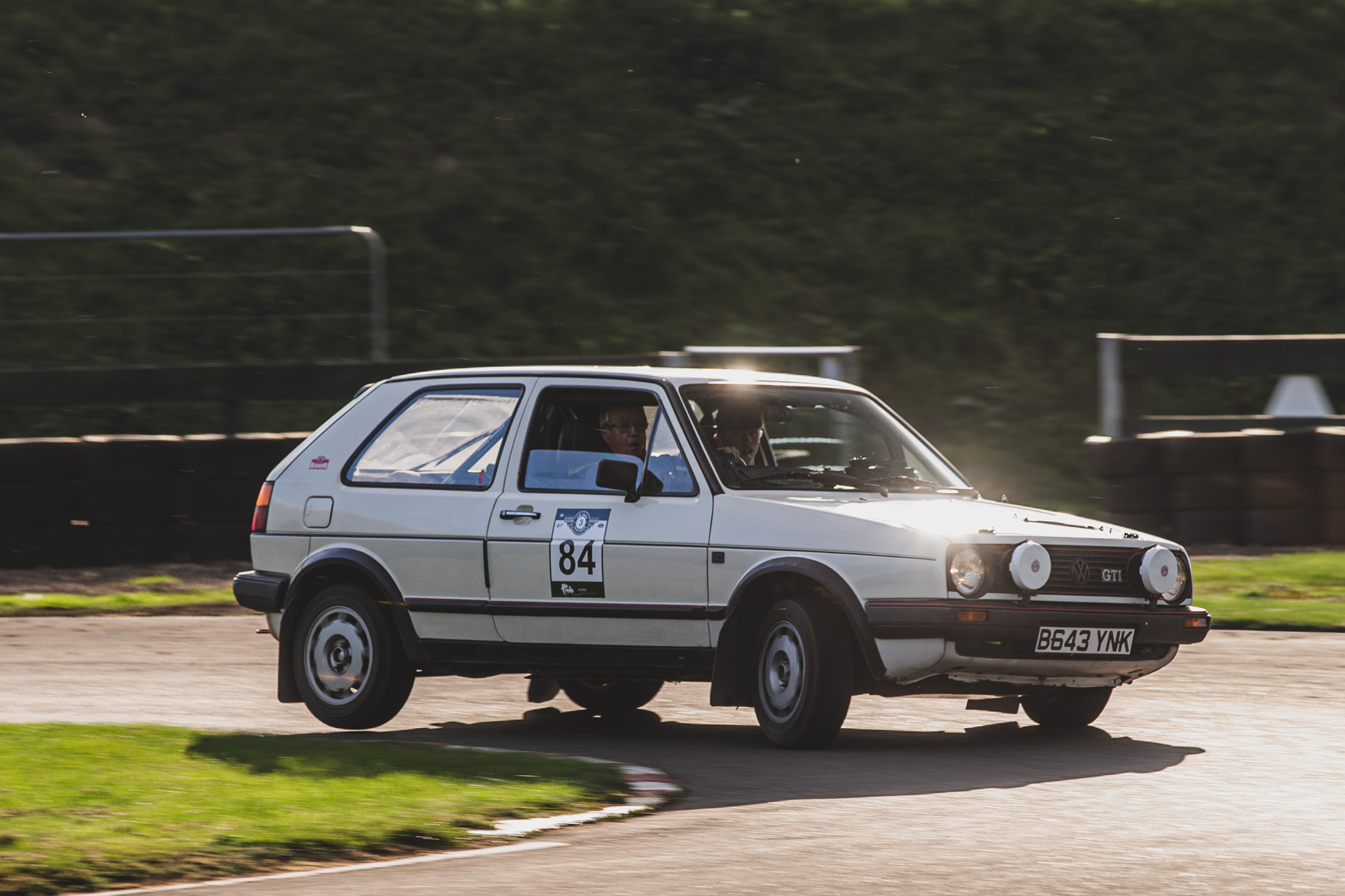 
HERO-ERA ran the third and final Challenge event of the year from their base at Bicester Heritage. This allowed for competition to commence within metres of the 75 crews taking the start; the opening four tests used the perimeter roads of Bicester Airfield.

With the class improvement scoring system being used, three crews found themselves still with clean sheets at the end of the tests, having been fastest in their class on all four tests. These were Tim Green/Melanie Green (Mini), Dave Hemstock/Colin Readwin (MGB GT) and Alistair Leckie/Matt Outhwaite (Saab 99 Turbo).

After the HERO Challenge Two, Leckie/Outhwaite had held second place in the Challenge Cup Championship, behind the BMW 2002 of Angus McQueen/Mike Cochrane; the latter crew having won the first two rounds. Leckie/Outhwaite had been runners up on both occasions. This had set up a show down between the two crews on the Challenge Three. Unfortunately, McQueen was unable to start the event as he was recovering from an eye operation. Alan Pettit stepped in and offered Cochrane the navigator’s seat of his Volvo PV544. However, they were to retire on Test 2 with electrical gremlins.

Paul Day/Alun Jones were also on the retirement list at an early stage. Their MGB ground to a halt on Test 1. This was further than Peter Moore/Dan Stellmacher managed; their Riley Special lost compression on one cylinder and failed to take the start.

The first regularity of the rally was 20 miles long and contained six timing points. It started just north of Ludgershall and finished on the outskirts of Oxford. Paul Bloxidge, fresh from his win on the Scottish Malts, the previous week, had grandson Oli Waldock on the maps, and they put up the best performance on the regularity, dropping just three seconds.

Regularity 2 took competitors back towards Bicester, passing through Islip and Murcott. It was 11 miles long and contained three timing points. Curtis Jacoby/Graham Tuer in their Jaguar XJS HE were best over the section on one second penalty.

After a coffee break, Tests 1 to 4 were repeated. By the end of these, Bloxidge/Waldock held a lead of 11 seconds over Leckie/Outhwaite, with Tim Sawyer/Nick Cooper two seconds further back in third. By this point the early leaders, Tim Green/Melanie Green, had left the fray as their Mini developed engine problems.

The route headed west towards the lunch halt at Nether Weston, starting with Regularity 3, which was six miles long, with three timing points, one of which was located in a farmyard; this needed a careful reading of the tulip diagrams to find. A dozen crews missed it, these included Nick Van Praag/Laura Gilson (Austin A35).

After a short non-competitive section through Enstone, the ten mile Regularity 4 went past Jeremy Clarkson’s famous farm; the section being named Diddly Squat. It caused no problems for Paul Cooper/Alun Mills (MG B GT Coupe), who hit all three timing points exactly on time. At the lunch halt Bloxidge/Waldock had extended their lead to 19 seconds. Sawyer/Cooper were now second after Leckie/Outhwaite struggled on the third regularity, they dropped to fourth place behind Simon Ayris/Kim Bannister (MGB Roadster). The latter crew had been penalised for a line fault on Test 4, but recovered from 16th place to third at lunch.

There was plenty of competition still to come, with competitors tackling four more regularities and two tests before the Finish. Bloxidge/Waldock added just nine seconds to their total on the next three regularities. They were second in class on both of the tests at Shenington Kart Track, this put another four seconds on to their total.

They therefore started the last regularity with a substantial lead. They were a second early at the first timing point and a second late at the next, however they then were badly held up by a horsebox; this made them 32 seconds late at the third time control. The Joker System was being used on the event, a system which was designed to compensate for incidents such as this delay. Under the Joker, their penalty was automatically reduced to 15 seconds. The pair arrived at the Finish unsure whether the delay would deny them victory.

They need not have worried as they still finished 30 seconds ahead of the field; even without the Joker they would have won. It was 15 year old Waldock’s first rally win and he took the record for the youngest winner of a HERO-ERA event.

Leckie/Outhwaite had a good afternoon and climbed back to second place at the Finish. A result that assured them of the HERO Challenge Championship. Ayris/Bannister moved up to third, just two seconds behind the Saab duo. Bannister also secured the Clockwatchers Award for the navigator picking up the least penalties on the event’s eight regularities.

Junior WRC contenders Jon Armstrong/Phil Hall, competing in their first regularity rally, put in an impressive performance; they secured the Newcomers Award and Armstrong won the Test Pilot Award for the fastest total times over the ten tests.

Two Master crews tackled the event, although they weren’t eligible for overall awards. Steve Robertson/Thomas Robertson were using the event as a practice for an assault on the Rally of the Tests in November. They won the class and would have been second overall if they could have been classified.

The other Masters crew were Steve Chick/Alex Chick. They were debuting their Datsun 260Z. Their day was spoilt by having been adjudged to have done a wrong test on Test 5. This added 30 seconds to their total. They ended the day 31 seconds behind Robertson/Robertson.