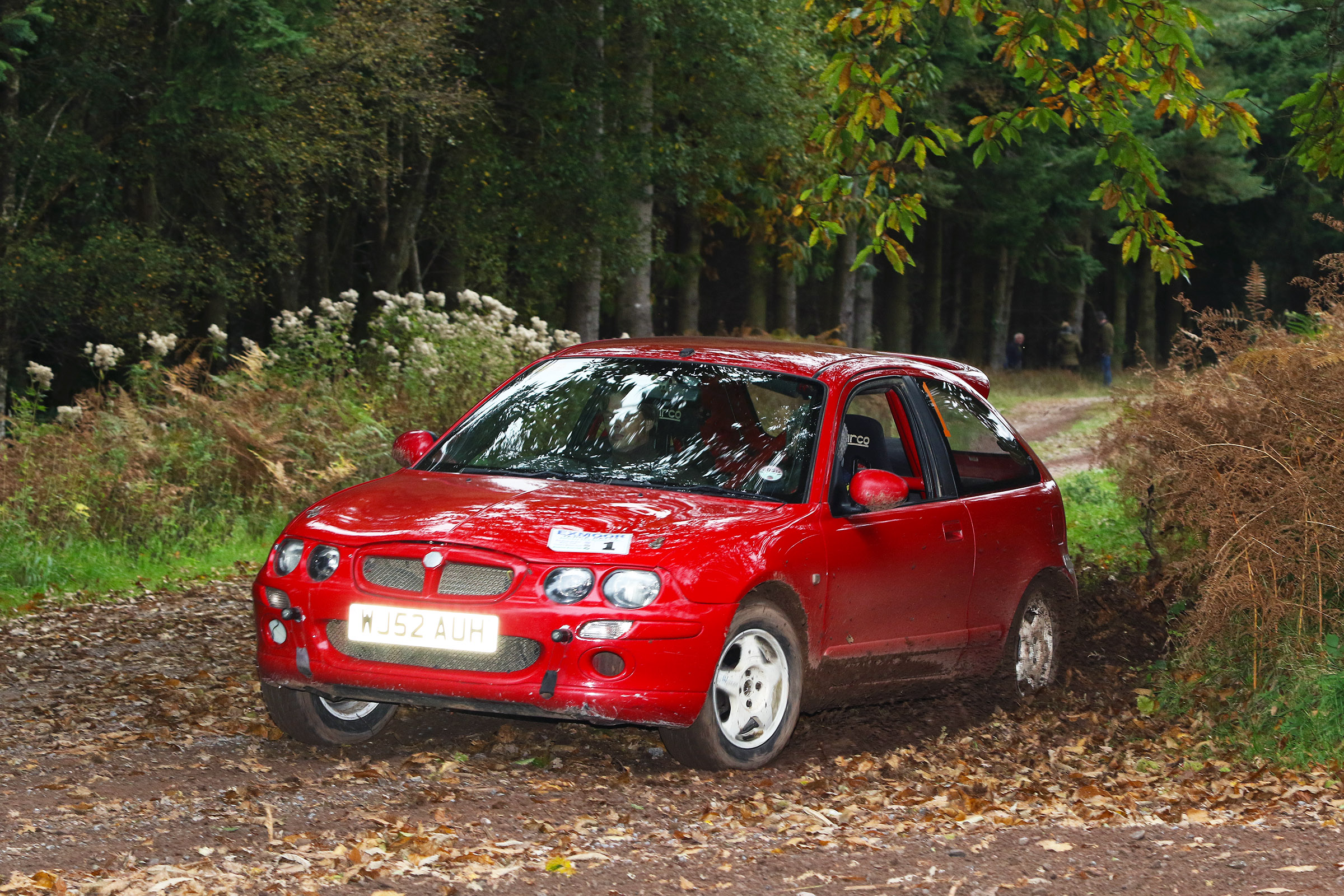 
After a CoVid enforced break in 2020, the Exmoor Targa returned with its traditional format of tests in both the Croydon Forest and the Porlock Toll Road. Ten tests were planned; six on gravel and four on the tarmac of the Toll Road. Giving a total test mileage of 40 miles.

Fifty-four crews took the start from the Ralegh Cross Inn in the heart of the Exmoor National Park. Thirty-seven were competing in the Inter-Club event, while 17 were contesting the Clubman Rally

The first two tests, Longwood 1 and 2, were a repeat of each other, consisting of 5.1 miles in the southern part of Croydon. Two of the top ten crews failed to make the finish of the first test. Paul Tod/Rich Aston overshot a code board, as the driver placed their Peugeot 306, into reverse, the gears jammed; they got no further. Meanwhile Gareth Andrews/Steve Cox had a brake pipe split on their Proton Compact. Paul Watts/Chris Perry made it to the end of the test, but then withdrew as the clutch on their MG ZR had failed.

Ethan Davies continued the form shown at his win on the Targa In The Dark, on the Exmoor he was navigated by Dafydd Evans; Davies took fastest time on Test 1. The Puma crew were six seconds faster than Chris Woolley/Jamie Woolley, with the leading Clubman team of Gary White/Bradley White another seven seconds further back.

Davies/Evans extended their lead by being eight seconds faster than Turner/Vestey on Test 2. These two crews held the top two spots after the test, with the Welsh pair 29 seconds ahead.

Keith Lane/Julie Lane had been in sixth place after Test 1, but hit problems on Test 2; a perhaps over enthusiastic use of the handbrake caused a slave cylinder seal to pop. They struggled to the test finish, trying to keep out of the way of other cars, and then attempted a repair. They tackled Test 3 with some caution, not sure of the car’s stopping abilities, only for the Ka to develop electrical problems. Deciding that it wasn’t their day, and to save the car, they withdrew.

The second test saw two significant delays, the first after a car went missing and had to be located, then by a collision between two cars. This meant that the later competitors entered the opening test over an hour late. The hold ups led to the organisers delaying the restart after the lunch halt by an hour and then cancelling the final two tests, the second visit to Porlock. This meant that the event would finish at the original planned time.

Test 3, Knowle, was the longest of the event at 5.6 miles. Dramatically, Ethan Davies sustained a puncture a couple of miles from the test finish, but continued. Turner/Vestey were fastest, having gone flat out, but Davies/Evans were only 12 seconds behind. This meant that Davies/Evans retained their lead, but with a reduced margin of 21 seconds.

Davies didn’t find Porlock to his liking; on time, he lost 10 seconds to Turner on the first ascent. This would have seen him retain an 11 second lead; however, the Puma driver was penalised 10 seconds for hitting a cone on the test. This put Turner/Vestey just one second off first place. The MG ZR pairing then took another 9 seconds out of Davies/Evans on the second accent of Porlock, and again Davies was adjudged to have hit a cone, adding ten more seconds to his total.

Porlock was to the liking of Lucas Redwood/Zak Linham (Ford Sierra); despite having one of the largest cars on the tight toll road tests, they took fastest time on both tests, moving them up to fifth place at the lunch break.

As the leading crews arrived at Ralegh Cross for an extended break, Turner/Vestey led Davies/Evans by 18 seconds. Gary White/Bradley White led the Clubman Rally with penalties 33 seconds greater than the Inter Club Rally leaders, but over three minutes ahead of the second placed Clubman.

The leading Semi-Experts at this point were Elliott Sharp/Michael Spicer (MG ZR), who were in fifth place overall. They were to retain these positions until the Finish. Mark Aldred/Matthew Torok, in another MG ZR, were the highest placed Novices and, again, held that honour through to the end.

The afternoon run now consisted of the three gravel tests in the forest, with, to Ethan Davies’ relief, no return to Porlock. Tests 6 and 7, Bats Castle 1 and 2, were Tests 1 and 2 run in the reverse direction, while Test 8 was a repeat of Test 3 at Knowle Wood.

Owen Turner took another 13 seconds out of Ethan Davies on Test 6, but then the Welshman regained that amount back on the final two tests. The two crews therefore arrived at the Finish separated by the same 18 seconds that were between at Lunch.

This gave Turner a remarkable record of five straight wins on the Exmoor, the last four, with Vestey on the maps.

Gary White/Bradley White took fastest time on Test 6; this allowed them to consolidate their substantial lead in the Clubman Rally.