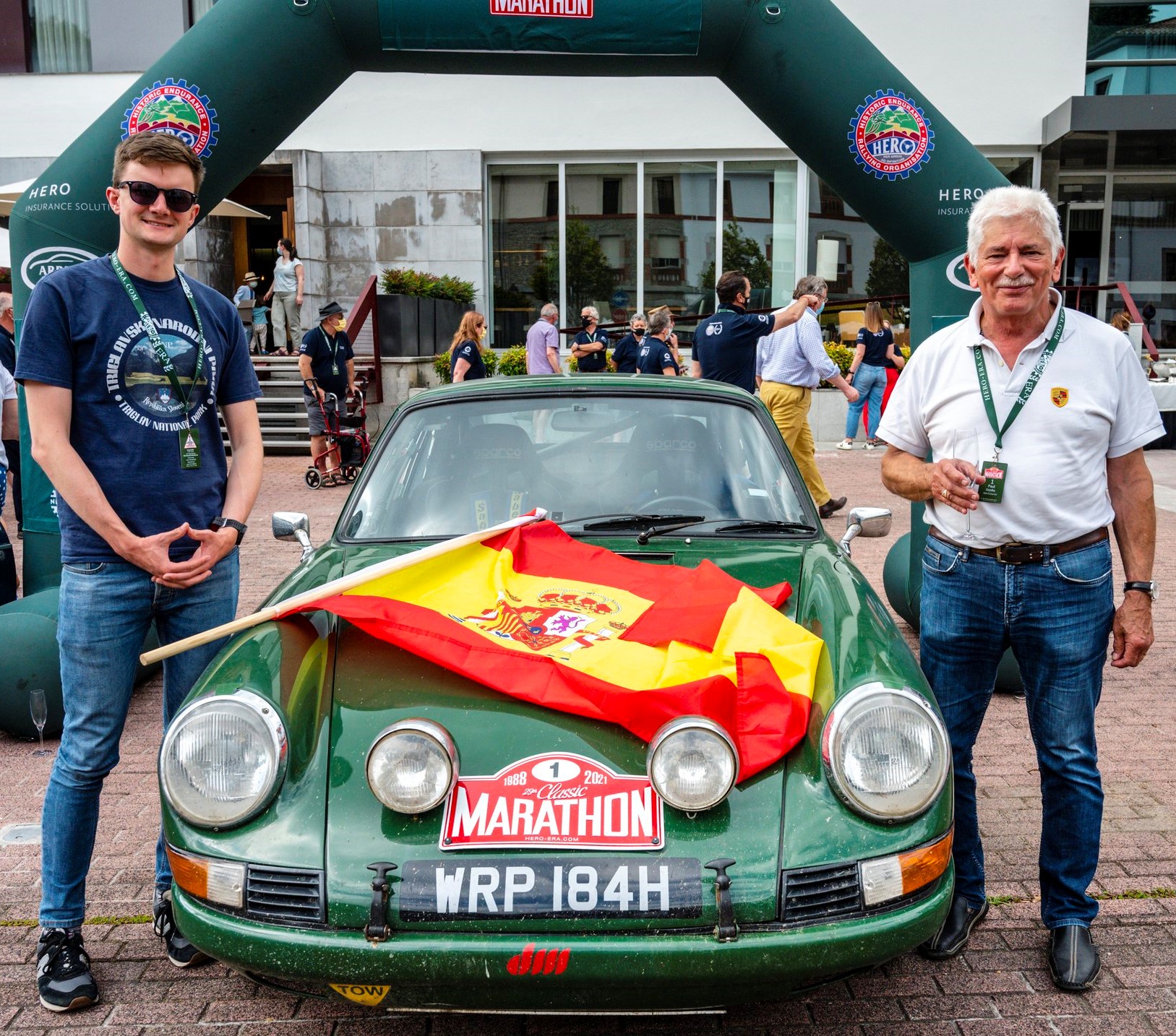 
HERO-ERA’s first venture abroad for almost two years saw 29 crews tackle a 2,200 Km route through North-West Spain and Northern Portugal. The six day event, which is considered one of the tougher contests in the organisers’ collection, included 38 regularities and five tests. The start and finish were at Las Caldas and took in some of the most demanding and spectacular roads in the region.

The first day ran south through the Picos de Europa to the first overnight halt at Ponferrada. Top seeds and winners of the previous running of the Marathon in 2018, Paul Crosby/Andy Pullan (Porsche 911), were the initial leaders; they arrived at the lunch halt with a lead of 15 seconds, having only dropped 10 seconds themselves on the morning sections.

The chase was led by Mark Godfrey/Sue Godfrey (MG B), Paul Bloxidge/Ian Canavan (VW Golf GTi) and Marcus Anderson/Matthew Lymn Rose (Jaguar E-Type). These four crews were to contest the top places for the remainder of the event.

Andersen/Lymn Rose had been penalised 10 seconds for a line fault on the first regularity and, after the lunch halt, they suffered a jump start fault on the first test of the event. Despite these setbacks, the crew found themselves in the lead at the end of the day. Crosby/Pullan had picked up a maximum one minute penalty at one timing point after being misled by a tricky piece of navigation. This dropped them to ninth place.

Day Two took crews into Portugal, contesting seven regularity sections on the way. Godfrey/Godfrey took the lead on the fourth regularity, but lost it on the first section after the lunch halt. Andersen/Lymn Rose were back in front by the overnight halt, holding an advantage of 18 seconds. Notably, despite suspension concerns, Crosby/Pullan were back to third by this point.

Less fortunate were Bill Cleyndert/Leigh Powley, who had had to cut most of the day’s competitive sections as their Ford Model A Special suffered wheel bearing and head gasket problems. They had held the Class 1 lead and sixth overall until these problems struck.

The highlights of Day Three were a run over the Portal do Inferno, with its 3000 foot drops on either side, and two tests at Caramulo Hill Climb, although five regularities had also to be taken into consideration.

It was a triumph for Andersen/Lymn Rose; they put in best performance day and held a lead of 32 seconds over Crosby/Pullan at the final control. Cliff England/Peter Rushforth had the shaft on their MG B break as they sped away from the line at the start of the first run up Caramulo. With help of the mechanics and a local workshop, they got the part replaced during the lunch halt and successfully tackled the second run up the hill.

From the overnight halt near Porto, the route headed back into Spain via a test at the Baltar Kart Track which was followed by seven regularities. A major wrong slot on the fourth regularity saw Andersen/Lymn Rose pick up the maximum one minute penalty at one timing point; they were in fact over 17 minutes late at the control. They dropped to fourth place and Crosby/Pullan were back into the lead.

By the end of the day Crosby/Pullan led Godfrey/Godfrey by 26 seconds, while Andersen/Lymn Rose had climbed back to third, four seconds further back.

Day Five ran around the north western corner of the Spanish coast and was the longest of the event. There were eight regularities, with a total of 29 timing points. During the morning sections Godfrey/Godfrey closed the gap to the leaders by nine seconds. The two crews seemed evenly matched, but another second was shaved off the lead by the time they reached Vigo Bay at the end of the day.

Once again Andersen/Lymn Rose picked up a one minute penalty on the fourth regularity; they were almost credited with a wrong approach, which carried a 2 minute 30 second penalty, but they managed to correct their mistake just in time and reached the timing point from the correct direction, but over a minute late. Once again, they fell to fourth place.

The final day opened with the longest regularity of the event; it contained seven timing points. By the fourth timing point, the two leading crews were level. Both dropped a second at the next control, but then Godfrey/Godfrey hit the front, scoring a zero as Crosby/Pullan were three seconds early. By the lunch halt at Tineo the MG B crew held an advantage of eight seconds over the Porsche 911.

However, this position was short lived as at the first timing point after the restart Godfrey/Godfrey dropped 20 seconds, while Crosby/Pullan were 16 seconds faster, putting them back into a lead they weren’t to lose. The Porsche pairing completed the event with a victory margin of ten seconds, to make two Classic Marathon wins in succession.

Sue Godfrey had the consolation of winning the Clockwatchers Award for the best performance over the 36 regularities; she beat Andy Pullan to the honour by just four seconds. Paul Crosby won the Test Pilot Award, having been fastest on four of the event’s five tests.