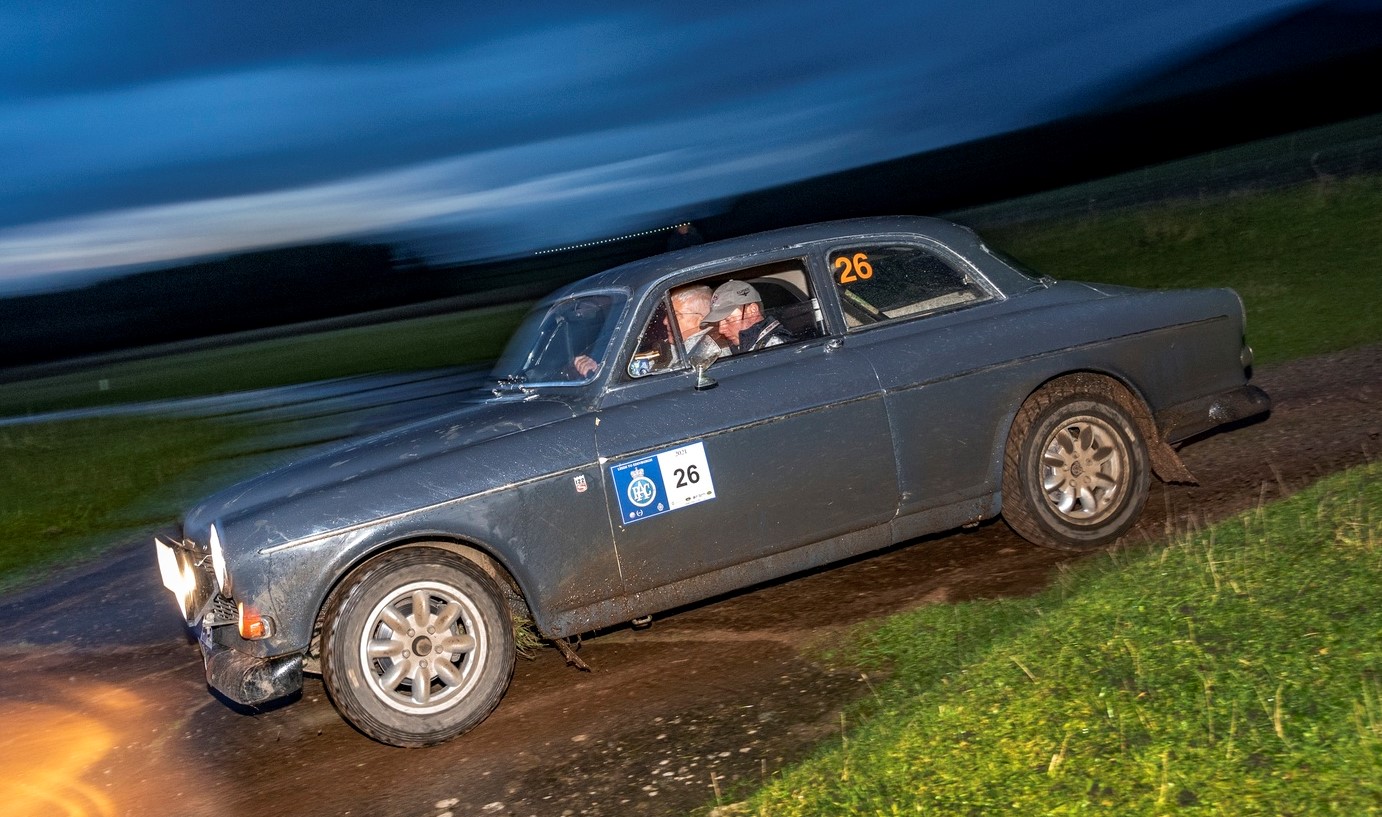 
HERO-ERA attracted seventy-three starters, including a number from Continental Europe, for the 2021 Rally of the Tests, one the toughest challenges for classic car enthusiasts.

There were ten classes, although only pre-1975 cars were eligible for overall awards; the remaining four classes were left to fight for category prizes.

Competition opened with a short evening Prologue, consisting of two tests and two regularities. The tests and the opening regularity all took place within the grounds of Bramham Park, the site of the Leeds Festival.

The Prologue was designed as a warm up for crews and to determine the running order for the first full day of competition, however, two crews, both fancied for top honours, had problems. Phil Hindley/Iain Tullie added to 2 minutes 30 seconds to their total after picking up a wrong approach at the fourth timing point in Bramham Park; they had been misled by a gate, purposefully left open by the organisers.

More significantly, Dan Willan/Niall Frost were brought to a halt after a rod came through the side of the engine block in their Volvo PV544. They reappeared the following day in a newer Volvo and completed the whole route, although, due to the change of car, they were placed at the rear of the field.

Bas van Kamperdijk/Erwin Berkhof were fastest by five seconds on the opening test and maintained their lead by being fourth quickest on the second. However, it was Paul Crosby/Andy Pullan (Porsche 936) who headed the field after the intricate opening regularity; they dropped 17 fewer seconds than any other crews over the section.

A short public road regularity brought crews back to the overnight halt at Oulton Hall, just outside Leeds. By this point Crosby/Pullan held a lead of 14 seconds over 2019 Rally of the Test winners, Paul Wignall/Mark Appleton (Alfa Romeo Giulietta). Andrew Leurs/Ryan Pickering (Opel Ascona) were on the same penalty as Wignall/Appleton, but, being in Class 7, they weren’t eligible for overall positions.

Paul Dyas/Martyn Taylor (Volvo Amazon) were in fifth place, the only other crew with penalties of less than a minute.

The Day opened with two tests at the Harewood Hill Climb, before a second visit to Bramham Park for another regularity. There were two more regularities before the morning coffee halt at North Rigton.

There was concern at this point for Paul Dyas as the gearbox drain plug had loosen and let the oil seep out. The fault was sorted at the halt.

Crosby/Pullan had extended their lead to 21 seconds, with Wignall/Appleton were still in second, but Darell Staniforth/Nicky Staniforth (Mini Cooper S) had moved up to third place.

By this point two crews had retired. Mike Kirk/Malcolm Capstick (Ford Escort RS) had succumbed to diff/gearbox maladies, while the engine had expired on the Porsche 944 of Roy Perkins/Peter Ward.

Four tests, including another visit to Harewood, plus a regularity with six timing points brought competitors to the lunch halt at the glorious Duncombe Park. By this point Wignall/Appleton had reduced the leader’s advantage to seven seconds, while Leurs/Pickering had repassed Staniforth/Staniforth.

Two tests at Duncombe Park opening the afternoon proceedings; these were followed by three regularities. On the first of the Duncombe tests, Crosby/Pullan were penalised for hitting a cone; in the closely contested Class 3, this meant that, under the class improvement scoring system, they were awarded 15 seconds for the test.

This meant that by the afternoon tea halt, taken at Leyburn, Wignall/Appleton had moved into first place; they were seven seconds ahead of Crosby/Pullan at that point.

From Leyburn crews departed for two TC sections, plus a test, over the Catterick Military Ranges. The final time control on each of the two sections was timed to the second; the remainder were timed to the minute, with 15 seconds penalty per minute late at a control. By the time that crews arrived at the overnight halt at Redworth Hall, Leurs/Pickering had moved to the front of the field, while the gap between Wignall/Appleton and Crosby/Pullan had been reduced to two seconds, with the Alfa crews still in front.

Charles Graves/Andrew Fish had been struggling electrical problems on their Jaguar XK150 since the Prologue; this, at times, left them with no lighting. They had struggled on, but decided that discretion was the better part of valour, and withdrew before the night section at Catterick.

The morning of Leg 2 lived up to the event’s title as crews tackled eight tests, three on the Warcop Ranges, before the lunch halt. There were also three regularities, the first two split by a halt at the Tan House Inn.

The key event of these sections was the retirement of Wignall/Appleton; their Alfa’s rear suspension failing after Test 2/5.

By the Kirkby Lonsdale lunch halt, Leurs/Pickering were almost a minute clear of the field, while the overall lead was now held by Paul Dyas/Martyn Taylor; they led Crosby/Pullan by 27 seconds. Remarkably, despite their Prologue error, Phil Hindley/Iain Tullie had recovered to fourth place overall.

Three tricky regularities took the route back to the North; a halt at Appleby Golf Course was taken before two time control section, in the dark, over the Warcop Ranges.

At Appleby Leurs/Pickering were still in front, but Dyas/Taylor had extended their lead over Crosby/Pullan to 40 seconds. Staniforth/Staniforth were in third place overall, although they were two minutes behind Crosby/Pullan.

Warcop was to have a dramatic affect on the overall results; Crosby/Pullan lost traction on a slippery corner and put their Porsche in to tree. They were out of the event on the spot.

To add to the pressure, crews had to contest two demanding regularities before the overnight halt at Slaley Hall. The final section used a number of triangles that caught out quite a few of the surviving competitors.

At Slaley, Leurs/Pickering, who had put in the best performance over the day’s sections, were still only 16 seconds ahead of Dyas/Taylor. The Volvo crew had a secure first overall placing, as Staniforth/Staniforth were four minutes behind them. The interest now turned to whether the father and daughter team could hold off a fast recovering Phil Hindley/Iain Tullie for the runner up spot. The two crews were separated by 38 seconds at the end of Leg 2.

Kamperdijk/Berkhof (Porsche 911T) were in fourth place on the leaders table, but, being in Class 8, weren’t eligible for overall placings.

Sunday was a comparative short day, but was still very demanding. It contained five regularities and nine tests, the first three at Slaley, while the last three were at Stobs Camp. Two further tests and two regularities used the Kershope Forestry. The route headed almost directly north towards the finish at the Dalmahoy Hotel at Kirknewton.

As the competitors entered Scotland, Leurs/Pickering were over a minute in front, while Dyas/Taylor had a three minute lead over Staniforth/Staniforth, however Hindley/Tullie were now just 13 seconds behind the Mini.

After the three Stobs Camp tests and three timing points in the penultimate regularity, the gap had been reduced to five seconds, but then Hindley’s Porsche ground to a halt. The problem was traced to the fuel pump and they got going again, but had taken a maximum one minute penalty at the following timing point.

The overall results were therefore sorted with Dyas/Taylor following up their 2019 Le Jog win, with first overall on the Rally of the Tests. They finished over three minutes ahead of Staniforth/Staniforth, who in turn were a minute ahead of Hindley/Tullie.

Leurs/Pickering finished the rally with the fewest penalties, but had to be content with their first in class award. Pickering did however win the Clockwatchers Trophy, for picking up the least penalties on the event’s 22 regularities.

Bas van Kamperdijk had been in the running for the Test Pilot Award, for the fastest total time over the rally’s 29 tests, but at Stobs Camp the rear suspension of his Porsche collapsed and he was forced to limp to the Finish, missing out the final two regularities.

The Test Pilot Award went to the racing driver Phil Hindley, although the lowest test time total was taken by Dan Willan, but he wasn’t eligible for the award due to his change of car.

The problems encountered by the two Porsche 911s in these final stages altered the winners of the Marques Competition; Team Porsche 911 had been long time leaders, but Team Volvo sneaked through to take the win on the last sections.

The Spirit of the Rally Award went to Stuart and Emily Enderson, who , competing in their open top Bentley 4¼ survived a very wet Leg 1 without losing their enthusiasm or smiles.