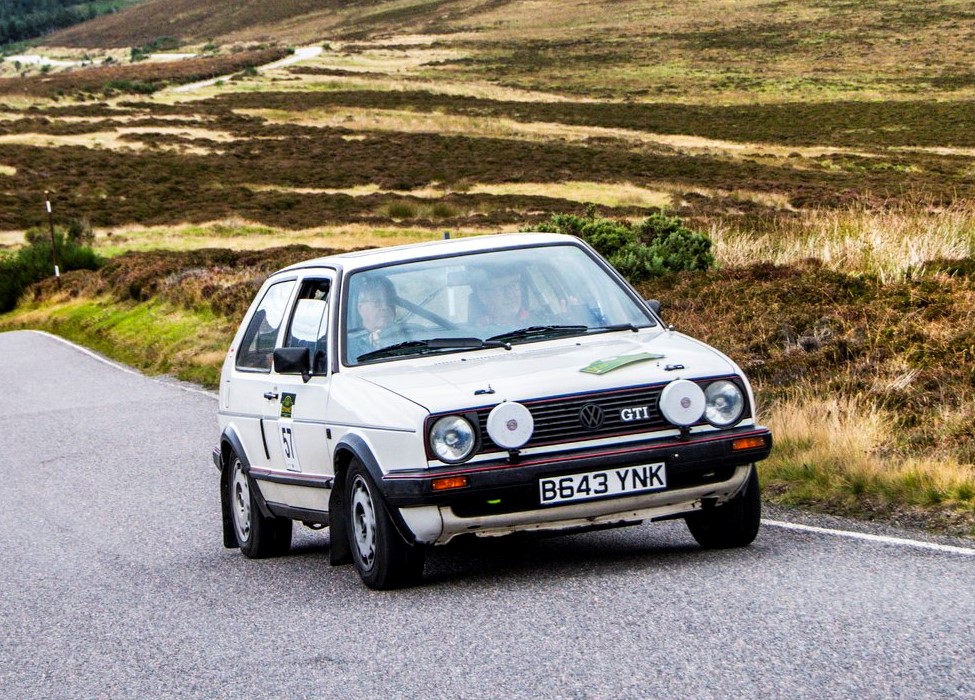 Clerk of the Course: Nick Reeves


The 17th running of the Scottish Malts was based at the Dalmahoy Hotel, Kirknewton, to the west of Edinburgh. The 57 starters faced a 930 mile route, which included 25 regularities and 10 tests.

After a short run out, crews tackled the opening test a venue familiar to HERO-ERA competitors, the Scottish Vintage Bus Museum. Despite the tightness of the test, Ed Abbott in his Jaguar XJS set joint fastest time with Daniel Gresley (Porsche 911). It was a bad start for 23 cars as they were awarded wrong tests, adding 15 seconds to their penalties.

The first Jogularity, a ten mile run starting in the Lochornie Forest, caused an issue for Daniel Gresley/Elise Whyte as they were held up by a tractor on the approach to the second and final timing point on the section; they dropped 33 seconds, which triggered their joker, which reduced the penalty to 15 seconds. However, with their rivals picking up minimal penalties, the incident meant that they were outside the top ten.

Visits to Deanstone and Tullibardine Distilleries were split by a coffee halt at Cromlix Hotel, which is owned by Andy Murray.

Regularity 1/2 used the lanes to the south-west of Crieff, the lunch halt being taken at the town’s golf club. At this point the lead was held by Graham Walker/Sean Toohey (Lotus Elan), who were looking to secure a hat-trick of wins on the Malts. They had dropped just one second on the morning sections.

After the break and a visit to the Glenturret Distillery, a Jogularity with five timing points, saw crews circle Ben Lawers. Malcolm Dunderdale/Anita Wickins (Renault 8 Gordini) dropped just one second here and this propelled them to a position where they were sharing the lead with Walker/Toohey at the end of the day, which was at Pitlochry.

The first regularity of Leg 2 used a regular trick; it started in a pub car park, which was private land, this meant that the rule which says that controls have to be two miles apart didn’t apply. The first timing point was under half a mile into the section and the vast majority of cars came in early.

The route then passed through the Spittal of Gelnshee to a coffee halt at Braemar Golf Club. Two short regularities followed, one just south of Ballater, the other south of Aboyne. The first test of the day used the drive up to the lunch halt venue at Kincardine Castle.

By this point, Dunderdale/Wickins were in a clear lead; Walker/Toohey having been five seconds early at that sneaky first timing point of the day. Steve Robertson/Julia Robertson (Triumph TR3) were in third, ten seconds off the lead, but had Paul Bloxidge/Ian Canavan (VW Golf GTi) just one second behind.

One regularity, five tests and a run over the Cockbridge to Tomintoul road made up the afternoon entertainment. By the the end of day stop at Inverness Walker/Toohey were back in the lead; they had only been beaten in their class once, while the little Renault of Dunderdale added 15 seconds to their total over the same tests.

Graham Platts had driven his Austin-Healey 100M all the way from his home in Monte Carlo to the start of the Malts, but on Reg 2/4 the clutch failed. He was carrying a spare and this was changed with the help of the sweep crew. He missed five controls, plus a test, but re-joined and contested the last two tests. For his marathon drive to and from the event, Platts received the Spirit of the Rally Award at the Finish.

Leg 3 opened with a regularity that ran through Culloden battlefield. Walker/Toohey managed to edge further in front by another one second on this section, but disaster befell the Lotus crew on the following Jogulairty in the Darnaway Forest; they hit a ford too fast and lost 20 seconds as they got the Elan fired up again. Therefore Dunderdale/Wickins found themselves back in the lead by the lunch halt, however their advantage was just one second over a recovering Gresley/Whyte. Bloxidge/Canavan were three seconds further back, while Walker/Toohey were now fourth.

Two regularities, one test and three more distillery visits made up the afternoon route. Significantly Dunderdale/Wickins were adjudged to have failed to stop astride the line at the first timing point after the restart and added ten seconds to their total.

At the overnight halt at Aberdeen Gresley/Whyte were in first place, three second ahead of Bloxidge/Canavan. Dunderdale/Wickins were in third, 11 seconds off the lead.

The afternoon was not kind to Alfa Romeos: the GTV 1750 of Judith Keiper/Katherina-Rabea Muller succumbed to gearbox failure, while the Alfasud Ti of John Evans/Adam Harvie-Clark broke a drive shaft.

The route ran generally south through the morning of Leg 4, as competitors tackled four regularities. By the lunch halt at Blair Atholl Castle, Gresley/Whyte had extended their lead, having put in a morning-best performance of dropping just nine seconds.

Significantly, Walker/Toohey were no longer in the competition; the Elan having ground to halt with a mystery electrical problem, probably a result of the soaking it had received in the ford the previous day.

Also in trouble was the Rover P4 of Mark Simpson/Liam Hammond; they arrived at Blair Atholl with smoke pouring out of one wheel arch. The mechanics diagnosed a seized brake calliper, meaning that the car could go no further.

The leader board was to receive a further shake up on the final regularity of the day. An instruction, which actually referred to two roads at a junction, was read by most of the competitors as denoting just one; instead of turning left around a triangle, they continued straight on. The organisers had placed a ‘No’ board around the corner, many saw this and reversed to the correct route, losing time but gaining the next timing point, which was nearby. Others continued straight on, past the ‘No’ board, and missed the control; these included Dunderdale/Wickins and 30 others.

Bloxidge/Canavan had taken the lead at the end of the previous regularity; they fell for the trap at TP 4/6C, but corrected the mistake and dropped 17 seconds at the timing point. Gresley/Whyte did the same, but picked up a penalty double that of their rivals.

By the overnight halt at the Crieff Hydro, Bloxidge/Canavan held a lead that they weren’t to lose. Gresley/Whyte were 35 seconds behind, while Joel Wykeham/David Brown (Alfa Romeo GTV6) had moved up to third.

Leg 5 initially ran north, via a halt at Killin, before heading west and taking in a test up the newly resurfaced Rest & Be Thankful hill climb. This proved exciting as a heavy downpour made the track very slippery, especially at the finish line. Both Paul Bloxidge and Daniel Gresley received line faults as they slid into the finish control. Despite this misdemeanour and its ten second penalty, Gresley still took the fastest in his class.

The morning’s excitement made little change to the leader board; Gresley/Whyte closed the gap to the leaders by five seconds, but were still 30 seconds from the lead.

A test and three regularities took competitors back to the Dalmahoy Hotel and the event finish. These competitive sections didn’t change the top places and so 2018 HERO Cup winners Paul Bloxidge/Ian Canavan came home as winners.

Canavan also won the Clockwatchers Award for the best performance over the event’s 25 regularities; he had dropped just 51 seconds across all the sections. The Test Pilot Award, for the driver with the best scratch times over the Malts’ ten tests, had to be decided on a tie break as both Dan Gresley and David Coxon (Austin Healey Mk3) finished with the same total. The award went to Gresley as he was fastest on the first test.