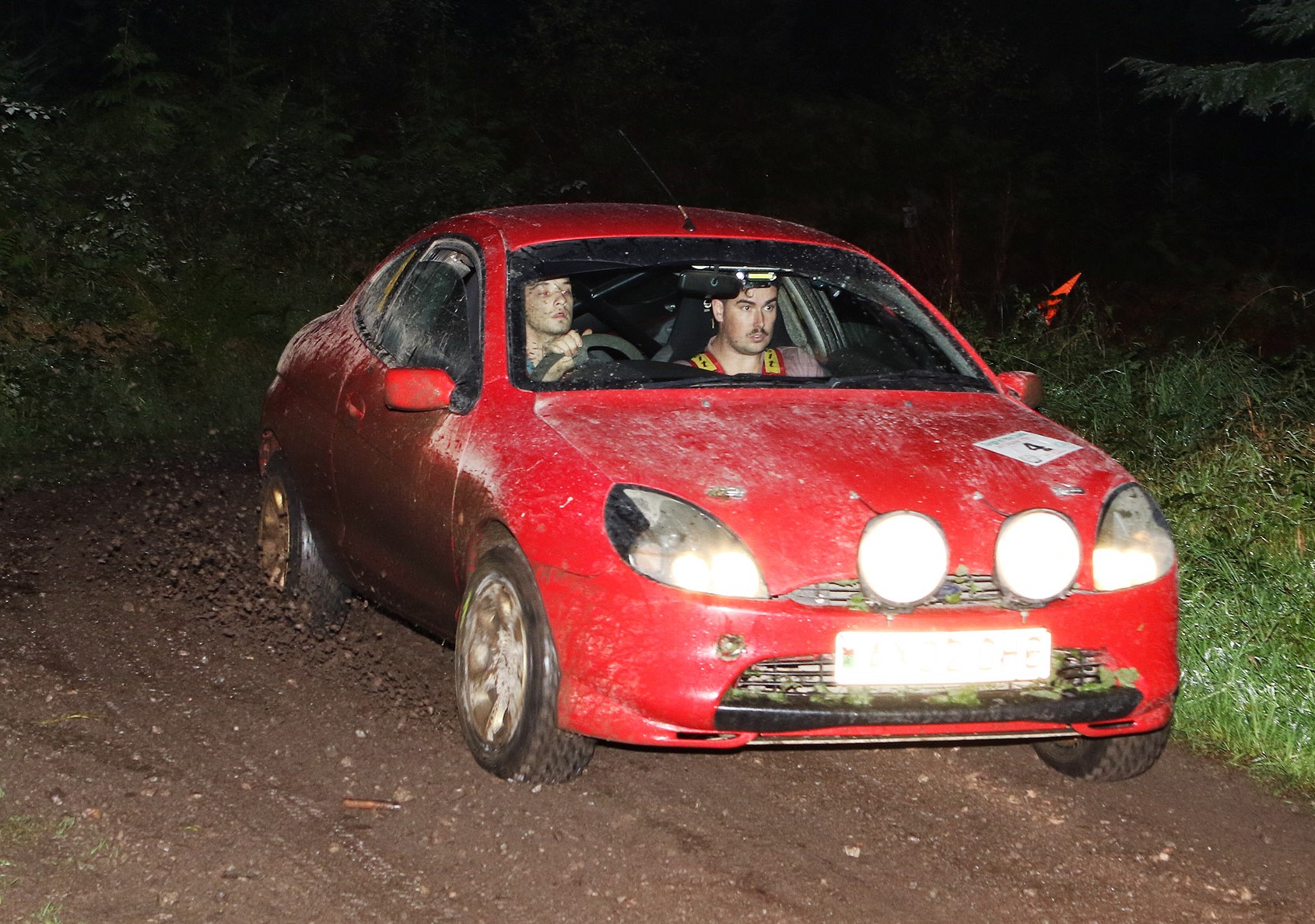 
Targameister John Davies was seeded at Number One but was unable to make the start, however in his stead, his son Ethan, navigated by Dan Johnson, took a dominant win.

Bath MC had devised a compact route based on the Wincanton Racecourse. Competition started at dusk. Crews tackled five tests, all familiar from the same club’s Festival Rally. After a short break, the five tests were repeated. This gave 22 test miles, with 52 miles of link sections.

Test 1 was a short half mile blast at Witham Hall Farm. However, the 55 starters had been reduced by one before this; James Griffiths/Matt Venables withdrew on the run out as their Escort developed a severe misfire.

Ethan Davies set out his stall for the event by taking fastest time, putting him and Dan Johnson into a lead they weren’t to lose.

The second test was at the nearby Froome Showground, where Dan Morris/Geth Johnson were fastest, putting them in second place overall, two seconds behind Davies. However, Davies stamped his authority on the event by taking fastest time on all three of the remaining tests in the first half; these were all forestry sections.

Test 3, St Alfred’s Tower, saw the demise of Rob Stephens/Rhys Jones; their Corsa ending its rally in a ditch. Nick Gurney-Sharpe/Peter Cox withdrew at this point, finding the going a little too rough for the Peugeot 205.

By the time that crew arrived at the mid-point halt, Davies/Johnson led Morris/Johnson by 38 seconds, with third placed Jason Stone/Daniel Stone (BMW Compact) being the only other car within a minute of the leaders.

Cadog Davies/Max Freeman were in fourth place, but they weren’t destined to make the Finish, the gearbox of their Proton Satria failing on Test 8.

On Test 1 at Witham Hall Farm Davies/Johnson had matched the test bogey, but on the competitors’ return to the venue for Test 6, 19 crews beat that target, the fastest, Jason Stone, stopped the clock on 48 seconds.

The final set of forestry tests were to cause difficulties for many cars. Most significantly, Morris/Johnson, who had been in a solid second place, went off the road on Test 9. They eventually regained the road after an eight minute struggle by the crew, but they suffered a test maximum and dropped out of the top ten.

Richard Jones/David Hillidge had led the Under 1400cc class after Test 5, but they were one of the crews to go off in Test 9; they lost over two minutes here. There was then a tight battle for the class win; Paul Freeth/Mark Dunkerley (Rover 214) beating John Taylor/Nick Taylor (MG ZR) by six seconds.

Chris Woolley/Jamie Woolley, who had been in seventh place at the halfway point, ditched their BMW on Test 8, and got no further. They blocked the road for several of the following cars and, at the Finish, notional times were awarded to these crews.

Again, Davies/Johnson took fastest time on all of the three forestry tests, thus they arrived at the Finish with a winning margin of 1m 49s, giving the crew their maiden rally victory.

After a steady start, Huw Morris/Dan Pidgeon increased their pace in the second half and brought their Ford Focus into second place. Stone/Stone felt that they may have eased their speed a little too much on the second visit to the forest and came in third.

Gary White/Bradley White, fulfilled their position as pre-event favourites, to win the Clubman Rally, with times that would have put them in fourth place on the Inter-Club event.