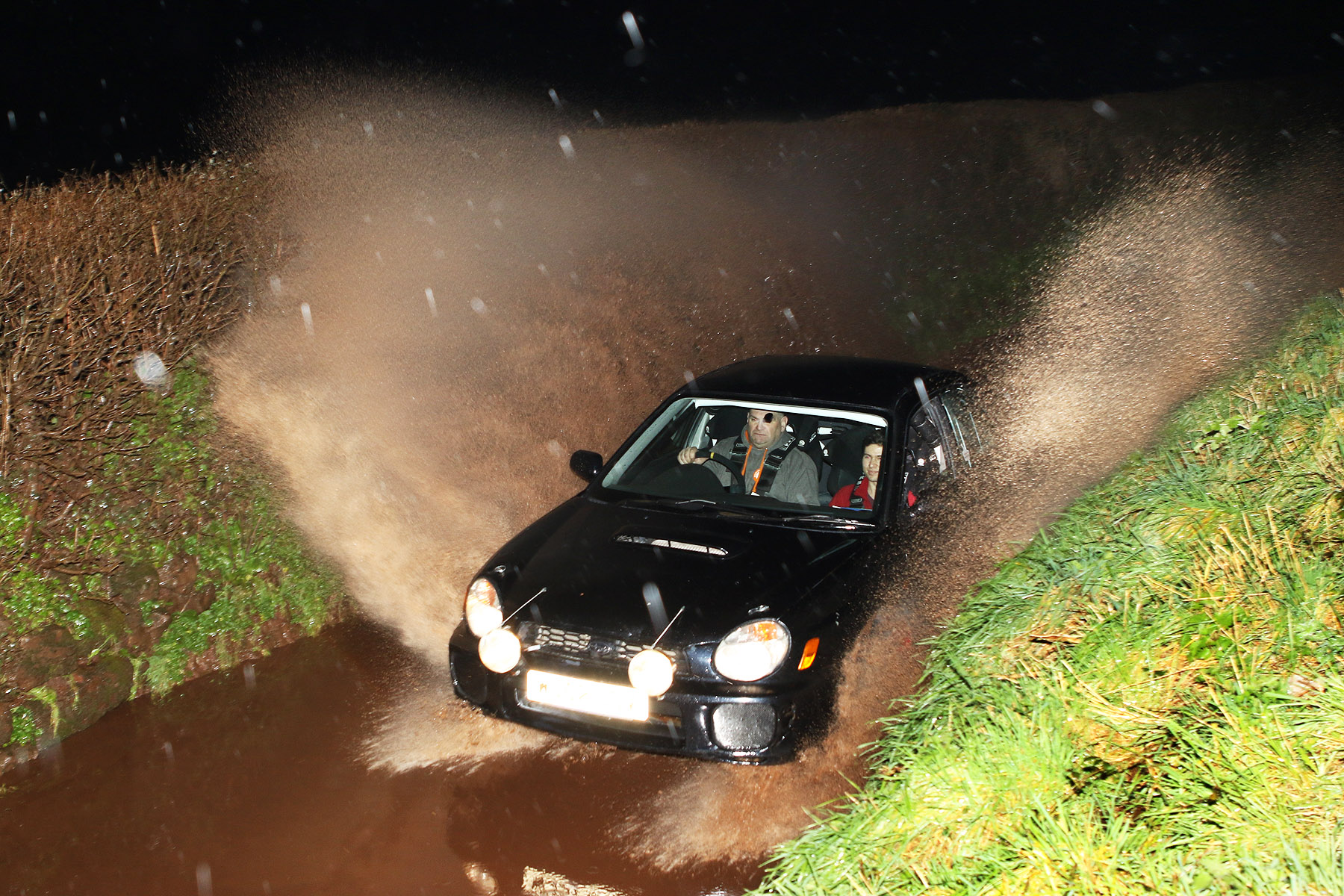 Clerk of the Course: Roger Hunt


The Baby Bagger was designed as a shorter less frantic version of its elder brother, the legendary Bagger. However, the event used the tight sodden lanes of Central Devon and proved to be as tough a test as the Bagger itself.

The rally started and finished at the Haldon Forest Diner, next door to Exeter Racecourse. A disappointing entry of just 36 cars took the start.

The 130 mile event opened with a section that started near Kenn and looped to the south of Haldon Forest, before finishing outside Chudleigh. Rob Stephens/Robbie Pugh (Ford Escort) were fastest to the first timing point; they were six seconds faster than Ethan Davies/Nick Bloxham (Ford Puma), with Kevin Willis/Jacob Williams (Subaru Impreza WRX) a similar margin behind in third.

Davies/Bloxham moved into the lead as they cleaned the remainder of the section. Willis/Williams also passed Stephens/Pugh, but were almost a minute off first place.

The top seeds, Mark Lennox/Ian Beamond (Ford Escort), had struggled on the first section, but recovered on the second, which used the lanes to the north-east of Bovey Tracey, and took second fastest time. This, however, was the high spot of their event as a short while later they slid off the road on a 90 left; the incident damaged the rear of their Escort and they were unable to continue.

Former Welsh Road Rally Championship front runner, Toby Adams, was competing on his first road rally for 12 years. He and navigator, Jamie Wilson, failed to make the petrol halt as they put their BMW 318 into a ditch.

Stephens/Pugh cleaned the second section and moved back into second place, but over a minute behind Davies/Bloxham. Matt Barker/Jordan Dziadulewicz (Peugeot 206 GTi) withdrew on this section, after being penalised for visiting a control twice.

The third section took the route north and east around Bridford. The gaps between the three leaders were extended, with Davies/Bloxham pulling out a lead of a minute and a half, while the same margin separated Stephens/Pugh in second from Willis/Williams in third.

There had been heavy rain for most of the day leading up to the rally and this had left a tremendous amount of standing water on the lanes; it had also swollen a ford used on the fourth section. The route now ran between Dunsford and the A30.

The section was to prove the most decisive of the night. Davies/Bloxham were slowed, and at one point stopped, by a misfire as water got into their Puma’s electrics.

Despite starting a Number 8, Willis/Williams now found themselves as the first car on the road. This meant that they had a clear run through the Westland Ford; those behind them were delayed at the crossing. This, combined with the crew’s excellent knowledge of the area, saw them drop just over two minutes to the first timing point. Both Davies/Bloxham, with their misfire, and Stephens/Pugh were over six minutes late at the same point. 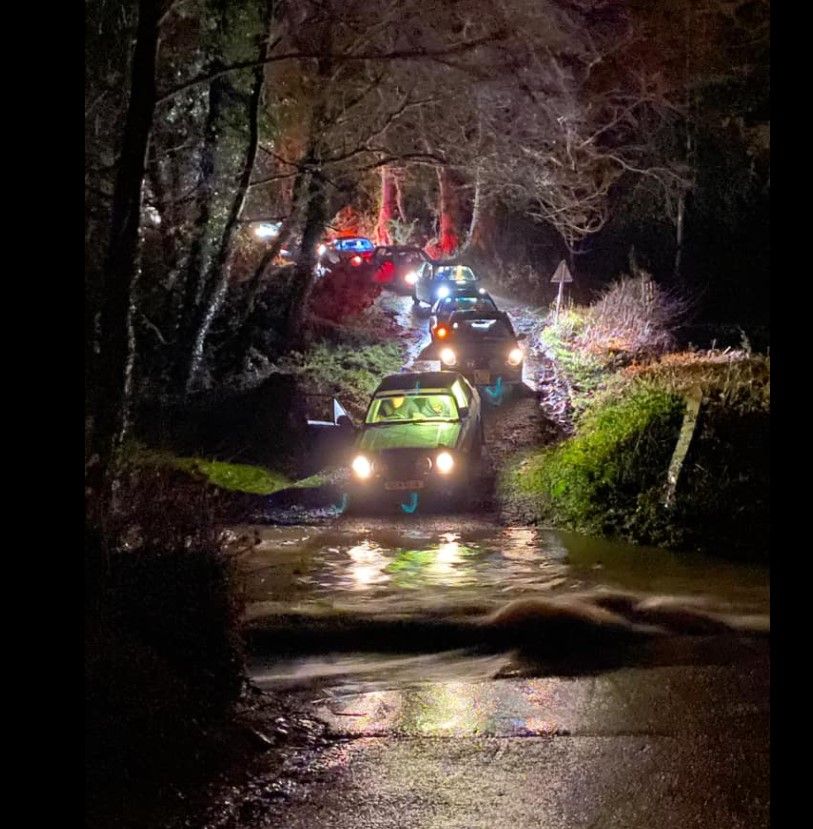 The delays at Westland Ford got greater, with crews in the latter half of the field held up as Luke Quinnell/Kayleigh Dingle drowning their MG ZR in the water. This led to a number of crews cutting out the last section before the fuel halt to remain within their maximum lateness. This was a mistake as the start control of each section was designated as a Main Control, therefore, by missing that check, crews were disqualifying themselves from the results.

With the cleanable fifth section taking crews to Petrol at Whiddon Down, the top positions remained as they had been at the end of the fourth. Willis/Williams led Davies/Bloxham by 1m21s, while Stephens/Pugh were 1m40s further back in third. There was a gap of over four minutes between third place and James How/Nic Jones (MG ZR) in fourth.

The complexion of the lead battle altered in the second half. In the first half it had been a three way fight, in the second it became a matter of a quicker crew trying to chase down the lead.

The route for the half, which was split into three sections, looped north of the A30, moving east and then south, bringing crews back to Haldon Forest, with competitive motoring finishing just a couple of miles from the finish venue.

The first big change to the lead battle was the retirement of Davies/Bloxham. They hit a bank at a T-junction and broke a wheel hub.

Stephens/Pugh had been 3m01s from the lead at Petrol and now set about hunting down Willis/Williams. Both crews dropped time at eight controls in the second half. Stephens/Pugh dropped least time at six of them and the two crews tied another. Despite this charge, the Escort crew ended the event 1m05s behind the Impreza pairing.

James How/Nic Jones (MG ZR) rounded off the top three, but were almost five minutes behind the winners.

The last car away from the start was the Escort of Mike Raymond/Jamie Raymond. Despite missing a couple of route checks, they won the Novice Class by a massive margin and finished in seventh place overall.