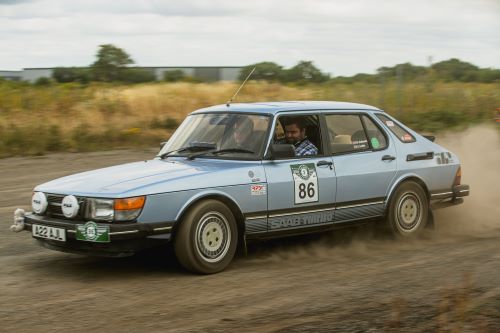 
Eighty-six crews took the start from Silverstone; they faced a day of seven regularities and ten tests.

Two tests at the Bill Gwynne Rally School at the nearby Turweston Airfield opened the day’s competition. Peter Joy/Matt Fowle (Lotus Elite) and John King/Tracey King (Toyota MR2) shared fastest time on Test 1 and, along with four others, were quickest on Test 2. The latter test was on the skid pan and was timed on scratch time, rather than the class improvement system used for all the other tests.

Andy Gwynne observed Test 1 to determine which driver would be the recipient of a prize of a half day course at the Rally School. Malcolm Rimington (Alfa Romeo Giulia 1600 Ti) was the lucky winner of this award.

The first 10 mile long regularity ran from Turweston, skirted Stowe School and Akeley, before finishing just outside Buckingham. There were four timing points. Five crews dropped just four seconds on the section, amongst them were Alistair Leckie/Matt Outhwaite (Saab 900 Turbo) who assumed a lead that they weren’t to lose.

Regularity Two was nine miles long and had three timing points. It ran through Great Horwood, Nash, Beachampton and Thronton, to end with a sneaky timing point on a short track; only one crew missed it.

Leckie/Outhwaite cleaned all of the three timing points to extend their lead. Malcolm Dunderdale/Anita Wickins (Mercedes 300E) put in the next best performance; dropping three seconds and were now in second place.

A London Map and speed table was used for Regularity Three, which was six miles long in the Wicken Wood area. There were two timing points. A number crews struggled with the map reading and arrived over a minute late at the second TP. Dunderdale/Wickins took two seconds back on the leaders, as they once again put in the best performance – along with four others they dropped just one second.

The first break of the day was taken at Yardley Gobion, with a coffee break. Leckie/Outhwaite held a lead of seven seconds over Dunderdale/Wickins here, with London-Lisbon winners, Harry Baines/Dick Baines (Mini Cooper S) in third, who were 16 seconds off the lead.

Five Masters crews, who weren’t eligible for overall positions, were competing. This class was led at the coffee halt by Darell Staniforth/Nicky Staniforth, who were debuting their immaculate Toyota Corolla. They led Stephen Owens/Nick Bloxham (Porsche 356B) by three seconds.

Two regularities were tackled between the coffee halt and lunch; the first was six miles long and had just two timing points. Three crews clean it, arriving at both TPs exactly on time; these were Clint Smith/Bradley Smith (Porsche 911), Paul Hughes/Hannah Jenkins (Mercedes 350SL) and John King/Tracey King (Toyota MR2).

There was a route check between the two regularities and this was missed by Baines/Baines; they fell from third to 59th.

Leckie/Outhwaite were, best once, again over the fifth regularity, a 13 mile section running west of Towcester to finish near Pattishall; there were five timing points. The leaders dropped just one second, which was two in front of Dunderdale/Wickins and four others.

This meant that at the lunch halt, the Wharf Inn at Bugbrooke, that Leckie/Outhwaite were 11 seconds ahead of Dunderdale/Wickins, while Paul Heaney/Sandra Heaney (Triumph TR6) were in third, 14 second further back.

In the Masters Class, the Bentley Derby 4¼ of Stuart Anderson/Emily Anderson was struggling with engine problems; they could tackle the regularity, but were just going to straight line the remaining tests. Also suffering from mechanical gremlins were Elliot Dale/Charlotte Ryall, their Escort had developed clutch issues.

Bicester Airfield was the site for four tests before an afternoon tea halt. Rikki Profitt/Graham Wild (Porsche 911 Carrera RS) were second fastest on two of them and third on another, but lost time in the dust on Test 6.

John King/Tracey King were in the top five on all four tests; they were to go on to win the Test Pilot Award, having been ten seconds faster than any other car on the event’s ten tests.

Leckie/Outhwaite were now 19 seconds ahead of Dunderdale/Wickins. Heaney/Heaney were 27 seconds behind the Mercedes crew, but four ahead of Peter Joy/Matt Fowle (Lotus Elite).

The final regularity was an hour in duration and had six timing points. It ran through Weston-on-the-Green, Islip, Beckley and Brill. Dunderdale/Wickins were best over the section on two seconds, which was five seconds better than Leckie/Outhwaite, setting up a tense finale over the four tests that closed proceedings. These tests were repeats of the previous ones at Bicester Airfield.

Both crews were second fastest in their class on Test 7, but the Saab crew were only fifth quickest on Test 8, while Dunderdale/Wickins were second once again, to close the gap to the leaders by another four seconds. They were now separated by ten seconds.

Things were reversed on Test 9 with Leckie/Outhwaite being second in class, while the Mercedes pairing were only fourth. With an advantage of 12 seconds, the leaders were assured of the win, as long as they completed the last test correctly. They did and came home with a winning advantage of ten seconds.

After a number of near misses and second places, Leckie/Outhwaite finally took their maiden win. In addition, Outhwaite secured the Clock Watchers Award for the best performance over the seven regularities.

The pair also lead the Challenge Championship with one round remaining, with Outhwaite having taken maximum points on both of the opening rounds. Her second place means that Anita Wickins is the only navigator who can deny Outhwaite the title for a second year running.

In the Drivers’ table, Leckie now leads John Lomas, who won Class 1 in his Riley Sprite, by three points, with Malcolm Dunderdale three points further back.

Fastest times in their class on Test 7, 8 and 9 helped Peter Joy/Matt Fowle to overhaul Paul Heaney/Sandra Heaney for third place.

Darell Staniforth/Nicky Staniforth managed to regain the lead in the Masters Class and take the category win after speeding through the final four tests.