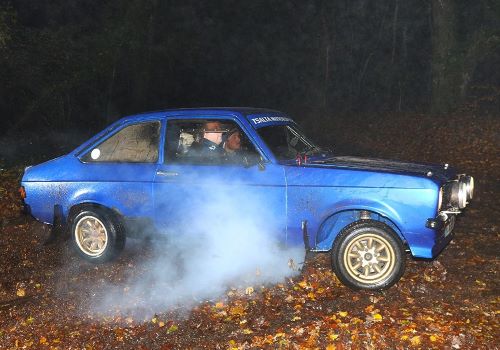 Clerk of the Course: Daniel Pidgeon


Exmouth Motor Club produced a tough test for competitors as they put on a 200 mile road rally in South Devon.

The event started and finished at the Greendale Farm Shop, east of Exeter. Forty-three crew took the start, as torrential rain, which had been falling for most of the day, began to abate. However, the prolonged downpour meant that there was a great deal of standing water in the lanes. This led to a reroute as a flooded road was impassable on the second regularity.

Former Welsh Champion, John Davies, was a late call up as he stood in for his son Ethan, who was contesting the Knutsford Targa the following day in, what tunred out to be, a failed attempt to secure the BTRDA Targa Championship. Davies, and navigator Byron Jones, were seed at Number Four but didn't get to the first regularity as their Astra refused to run cleanly.

The opening test snaked through the lanes and tracks to the west of Woodbury Salterton. Philip Luxton/Oliver Luxton were quickest by over a minute here. They lost their lead towards the end of the second regularity and then, just before the first petrol halt, put their Rover 25 into a ditch, from which they failed to escape.

There were four regularities before the Honiton fuel halt and, even by that point, the retirement list held a number of crews. These included Bredan Wellman/Nic Jones (Ford Fiesta ST150), who suffered a drive shaft failure, and Jake Evans-Luter/Jordan Dziadulewicz (Ford Escort), they had bent their car's steering on a white. In total 14 cars failed to make the halt, which was taken after 75 miles.

Over Regularities 2 and 3, Matt Rees/Jamie Mills (Ford Escort) moved to the front and built up a lead of almost two minutes by RF3. However, they then missed a code board early on the long fourth regularity. This was in a tight part of the route that used Wiscombe Hill Climb. The five minute penalty dropped Rees/Mills to third, which became second after Luxton/Luxton's demise in a ditch a little while later on the section.

These excitements meant that at Honiton the lead was held by the WRC refugees, Richard Millener/Michael Gilbey (Peugeot 206 GTi). They were 2m09s ahead of Rees/Mills, while the leading Semi-Experts, Elliott Dale/Charlotte Ryall (Ford Escort), were in third place, just over three minutes off the lead.

The flooding enforced re-route at the start of Regularity Two meant that the event was running over 20 minutes late at this point, therefore, to get the rally running back on schedule, the decision was taken to scrap the fifth section. Competition restarted on Regularity Six, a plot 'bash section, which ran to the south of Exeter Airport.

The gap between the top two crews reduced by 40 seconds at TC6A, while Lucas Redwood/Zak Linham (Ford Seirra), who had been in fifth place at fuel halt, dropped outside the top ten after picking up a wrong approach at that timing point. Joe Jones/Ryan Griffiths became victims of the conditions when their Seat Ibiza ingested water and came to a halt.

The route moved to the south west of Exeter for the long Regularity 7; this used the roads between Exeter, Dawlish and Newton Abbott. It proved to be decisive in the battle for the lead. Rees/Mills cleaned a critical section to TC7E (931.25 783 App S Dep NNE), while Millener/Gilbey dropped six minutes. This meant that at the second fuel halt, near Bovey Tracey, Rees/Mills held a lead of over three minutes. Second place was now held by Adrian Beer/Nathan Coles (MG ZR), who, like the leaders, had cleaned PC7E. Millener/Gilbey were now in third almost a minute off the runner up spot.

Three regularities remained; these took the route back towards the event's base at the Greendale Farm Shop. Timing on the final one had to be cancelled after the single mid-point time control was set up three miles off plot.

Rees/Mills extended their advantage on the eighth regularity, which circled around Bovey Tracey, cleaning both timing point. Millener/Gilbey moved back into second place as they finished the section over a minute quicker than Beer/Cole.

The leaders almost stubbled on the final timed regularity as they booked into two minutes early at one control and then lost another two minutes to their challengers at the final timing point. However, their lead survived and they came home with a winning margin of 1m29s, giving the crew their maiden rally win.

Millener/Gilbey took second place, a minute and a half in front of Beer/Coles, who finished in third place. Simon Heywood/Rhys Williams (Honda Civic) won the Semi-Expert Class, ending in fifth position. Patrck Blight/Poppy Blight (Peugeot 206) were the popular winners of the Novice category, in thirteenth place overall.

It had been a long tough night, with over half the entry failing to make the Finish; just 20 crews were classified as finishers.