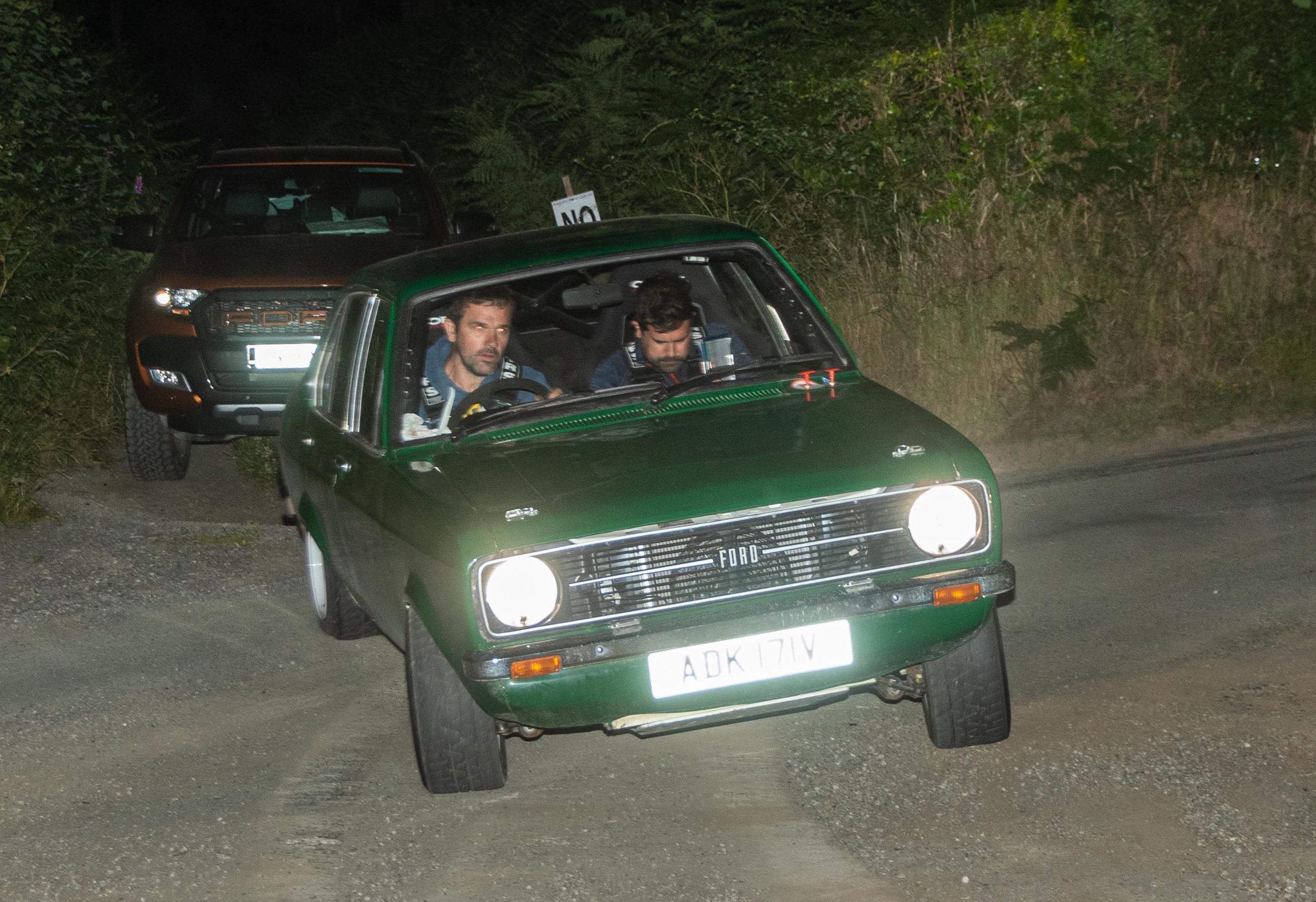 
Knighton Motor Club received a capacity 60 car entry for the Pacemaker Rally. Two non-shows meant that 58 cars took the start from Norbury Village Hall. They faced a compact 75 mile route in the Bishops Castle/Clun area, venturing over the border into Wales as well.

The first section straddled to the border, starting just north of Clun. It contained seven time controls before finishing at Dutlas.

At TC5 Kevin Kerr/Richard Williams (Ford Escort) were the only ones to arrive on time and they led Jerman/James by one second. Both crews dropped ten seconds at TC7, so it was just one second that separated the two at the top of the table at the end of section. Williams/Davies were nine seconds off the lead in third.

This was of no interest to Mark ‘GT’ Roberts/Dylan Jenkins who retired with a broken crank sensor on the Golf.

At this point Richy Williams/Will Atkins (Ford Sierra) were in fifth place and led the Expert Class, however their rally came to an end when they collected a series of punctures. They then manned one of the later Passage Controls.

Having taken a British Rally Championship win on the Quinton Stages during the day, Osian Pryce swapped seats and navigated for Rhodri Evans on the Pacemaker. After the opening test, the pair held a lead of over a minute in the Semi-Expert Class.

Their rally came to an end when their Escort got out of shape on some gravel and hit a gate post. The front driver’s quarter was badly dented, although there were no leaks and the car was drivable. However, they withdrew having lost over ten minutes with the incident.

The second section opened near Llanfair Waterdine, at Black Hall. Competitors had eight minutes to get to TC10 at Upper Treverward. All dropped time at the control. Jerman/James put in the best time, losing 25 seconds; this put them into a lead that they weren’t to lose.

Iwan Jones/Dafydd-Sion Lloyd (Ford Escort) had made a sluggish start buy by their standards; sixth fastest over the opening section, they tied for the best time with Jerman/James at TC10 and now tied for second place with Williams/Davies.

Jones/Lloyd moved into a clear second place as they were fastest to TF12, which closed the second section.

In third place at this point were Mark Lennox/Ian Beamond, who apart from the top two crews were the only car under a minute late at SF12.

A bent steering rack on their Escort put Andrew Sheers/Daniel Petrie out on this section, while Daclan Mason/Jamie Mills lost one of their Puma’s wheels and retired.

The third section was a short five minute section, but was plot ‘n bash one, with the navigation for the section only being issued at the start control. It ran north in the lanes to the east of Bishops Castle.

Most of the top crews cleaned it, although Lennox/Beamond dropped down the order as they dropped 1m 48s. They failed to make the Finish after breaking a shaft.

There only remained one section; it contained three time controls. It started at Upper Broughton, ran via Linley Wood to finish at Norbury.

Once again Jerman/James put in the best performance, adding 17 seconds to their total. They came home with a victory margin of 46 seconds.

The short but demanding route and clearly separated the competitors. Jones/Lloyd finished in second. Williams/Davies had closed the gap to them by nine seconds on the final test, but still ended 24 seconds behind them at the Finish.

The Expert Class was won by Jamie Crump/Robbie Pugh (Ford Escort), who finished in fifth place overall, over six minutes ahead of their nearest category rivals.

A nine minute wrong slot on a Neutral Section put Sam Ducroq/Rhys Jones in danger of being OTL at the Finish – maximum lateness on the short event was only 20 minutes. Ducroq/Jones arrived at the final control just one minute inside their limit. Their reward was victory in the Novice Class.

Ford Escorts filled the first seven place and there were 12 in the top 14 places.